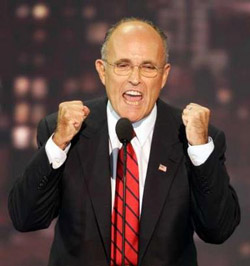 Perhaps realizing he's best received as a leader in a time of crisis and disarray--and no stranger to cheating on his wife while in public office--former Mayor Rudy Giuliani may offer himself as a candidate for governor in the case Governor David Paterson has to step down.

Paterson was ushered abruptly into office after revelations of Eliot Spitzer's consorting with literal, rather than political and figurative, whores. In his first two weeks in office, Paterson has been struck with a bout of logorrhea regarding women he's cheated with and drugs he has done. Yesterday, Paterson promised he would stop sharing such tales with voters.

But with Paterson's laundry list of confessions, the Post had reported "state lawmakers started researching the line of succession," finding if Paterson stepped down before August, then a special election would occur in November. If Paterson stepped down in August or later, State Senate leader Joseph Bruno would ascend to the Governor's office.

Giuliani's Presidential campaign fizzled out before it managed to actually catch fire and he's presumably stuck at home with his wife Judi Nathan. And heck, we've heard most of his dirty laundry...haven't we?