Another Juror in John White Trial Speaks Out: <br/>"I Definitely Have Some Regrets" 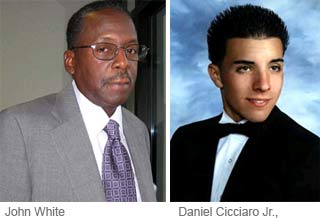 Though a guilty verdict was handed by jurors on Saturday, a second juror is speaking out about not wanting to find a Long Island man guilty of manslaughter. Donna Marshak told the Post, "I haven't felt right since the trial ended. I definitely have some regrets about not sticking to it."

John White was convicted of manslaughter, as well as criminal possession of a weapon, for fatally shooting 17-year-old Daniel Cicciaro Jr. in 2006. Cicciaro and a group of friends had gotten into a fight with White's son Aaron (over a misunderstanding) and went to White's Long Island home.

His defense lawyers had tried to claim that White, a black man, felt threatened by the "lynch mob" who was also yelling racial epithets and felt compelled to protect his family. The prosecution had argued that White did not need to take a pistol and confront the teens and that he could have locked himself in the house and called the police instead.

The jury had been deadlocked last Friday, December 21, but the judge urged them to push through, especially with the Christmas holiday coming up. The jurors' verdict was delivered the next day, but juror Francois Larche spoke out about being one of two hold outs in the jury who believed there was reasonable doubt for White's actions and did not want to find him guilty. However, Larche said he caved to pressure from other jurors, calling them hostile and rude.

Marshak said she succumbed because Larché had already caved, and she thought she had no chance to resist alone the onslaught of fellow jurors - and would never be able to single-handedly change any of their minds.

"I couldn't believe that some of the people right away knew he was guilty, after about an hour," she said. "Most of the people were respectful, but some just seemed like they just didn't want to listen. It was very difficult."

She also mentioned that she couldn't look at White when the verdict was read and afterwards, when driving home, she had to pull over because she was crying.

White's lawyers say they are appealing the verdict, using Larche's (and probably Marshak's) statements as evidence that Suffolk County Court Judge Barbara Kahn rushed the jurors' to a verdict. Experts tell Newsday that proving such a thing would be difficult, but was legitimate grounds for appeal: Defense lawyer Robert Gottlieb said, "What makes this unique is the timing of the judge's instructions and the threat to keep them deliberating on the eve of a holiday and perhaps even on the holiday itself. But the defense has a very difficult road ahead."

Larche, one of ten white jurors (the others were Hispanic and black; Marshak is white) had damning words for some of his other jurors. Telling the Times about jurors knitting, he said, "How can the people of New York think jurors can deliberate fairly while knitting?” and then said, "I wish that the people of the State of New York gave this man another trial in another county. I don’t think Suffolk County will ever be fair to Mr. White.”

The Reverend Al Sharpton will be leading a protest outside the Suffolk County courthouse on January 5. He said, "Suffolk County has not done anything about the white mob that went to [John White's home]...How do you tell someone not to defend their own home? I don't think he should have been charged with manslaughter."