Another East Village Pedestrian Attacked By A Pit Bull

Last Tuesday, hours before a pit bull belonging to homeless men attacked 42-year-old Ed Vassilev in the East Village and bit "through" his arm, another East Village resident was attacked by a pit bull in a very similar manner.

Michael Puzzo, a 47-year-old actor and playwright, says he was walking his girlfriend's dog Bobito, a 10-year-old, 9-pound Havanese-Maltese mix, on East 6th Street near 2nd Avenue early in the morning on August 5th. It was about 2:00 a.m. when he came across a man and his brindle-brown pit bull asleep in the middle of the sidewalk.

"I came across this crusty punk guy who looked like Charles Manson," Puzzo told us this morning. "Long dark hair, beard, torn black camouflage tee. You come across these people sleeping on the sidewalk all the time, but something told me I should be careful. Maybe because the pit looked like a sleeping tiger: large and a brownish with black stripes." Puzzo estimates that the pit bull was about 50 pounds to Bobito's 9 (for comparison, Puzzo tends to refer to Bobito as a "tic-tac.")

Puzzo says that he started to walk around the "situation" as slowly as possible, but that the dog opened its eyes as soon as Puzzo and his dog came close ("like when you come across a sleeping vampire," Puzzo analogized). "I yanked my dog's harness up like a fuzzy yo-yo and blocked the pit's mouth with my arm," Puzzo said. "It was nothing like Ed's arm but it still was pretty fucking bloody and painful. To be bitten by a dog is a very strange feeling. It felt like someone had lit my arm on fire."

According to Puzzo, the pit bull latched onto the underside of his right arm. He's not sure how long the pit bull held on, but Puzzo says that the dog's owner woke up almost immediately, and started yanking, incongruously, at Bobito's leash. Although Puzzo doesn't remember how he got the dog off of him ("All I was thinking was that I had to get my dog out of there," he recalled), he does remember the dog circling around him and Bobito until his owner managed to chase him off. Puzzo also remembers asking if the pit bull had shots, to which the owner answered yes.

Puzzo, who lives next door to the 9th Precinct, walked over to file a police report around 2:30 a.m., after stopping at home to address the bleeding with a paper towel. He says that the officers were friendly, and offered to call an ambulance. "They questioned me, but they wrote everything down on a paper towel," Puzzo said, adding that he soon learned that dog attacks of this nature are not deemed criminal (according to an NYPD spokesman, charges can't be filed unless the owner “directed the dog to attack"). Puzzo took a taxi to Beth Israel around 3:00 a.m., where a doctor dressed the wound and gave him aspirin. He didn't get a rabies shot because, according to the doctor, New York State hasn't documented a single rabid dog in the past decade. 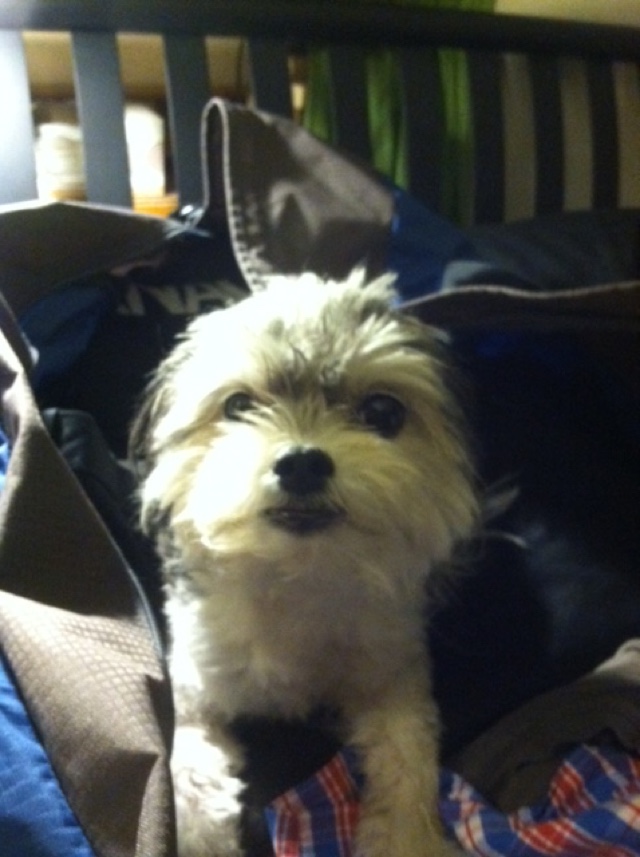 Around 11:30 that same morning, a pit bull who appeared to belong to two young homeless men, both sleeping, ran down the sidewalk after Vassilev and his dog, Misha, on 2nd Avenue between 4th and 5th Streets. When Vassilev picked up his dog, the pit bull latched onto his arm. Vassilev had to have his triceps muscle stitched together at a local hospital, and the wound later became infected. He was briefly hospitalized, and says that he's suffered permanent nerve damage. The dog, meanwhile, is undergoing observation at Animal Care and Control.

Puzzo hasn't seen the dog who attacked him, or the dog's owner, since the incident last Tuesday. However, he says he's talked to Vassilev's wife, and confirmed that the dog who attacked him was grey and white. "It would be better if there were just one dog tearing up the neighborhood," Puzzo said, adding, "I'm the luckiest motherfucker because I just got bit. And it still hurts, and is bruised, but it's finally healing, and my dog is alive."

The Post reports that Vassilev was not pleased to learn that the police would not arrest the owner of the pit who bit him, and told the tabloid it's all de Blasio's fault, because there are apparently "tons" of "new" homeless people with pit bull sidekicks.

Puzzo disagrees. "First of all, the crust punks aren't homeless," he said. "They are like vacationers camping on my street." Still, "If you choose to be homeless, you shouldn't be able to have a dog unless you take care of it properly. The problem is that these dogs aren't fixed, and they're not on leashes."

"I've lived in the East Village for 18 years," Puzzo said. "And the crusty punks have been here for at least 10."

#2nd avenue
#bites
#crusties
#east village
#pitbulls
#original
Do you know the scoop? Comment below or Send us a Tip