Another Close Call at JFK Airport? 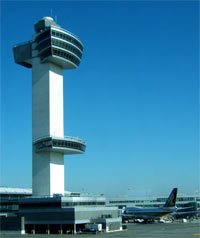 Air traffic controllers say two planes were within 100 feet of colliding at JFK Airport this past weekend.

The FAA is investigating (it hasn't heard of such an incident yet), and a spokesperson for one of the airlines allegedly involved said the claim from air traffic controllers was "false." However, the National Air Traffic Controllers Association says the incident occurred on Saturday, between two passengers planes on runways perpendicular to each other. According to the NATCA's spokesman, an air traffic controller "ordered the inbound pilot to take a hard left and the outbound a hard right, avoiding a collision."

#air traffic control
#air travel
#airplane
#close call
#jfk airport
#near collision
Do you know the scoop? Comment below or Send us a Tip