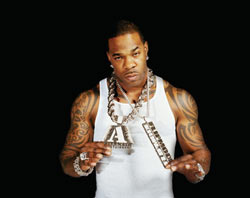 Having "Bodyguard for Busta Rhymes" on one's resume may be more than a career killer. One of the rapper's former body guards was found dead in the back of a Lincoln Navigator in Queens Wednesday. 35-year-old Jermaine Williams of the Bronx had been shot multiple times--at least once in the head--and wrapped in a blanket before being placed in the SUV.

Williams had not worked for Rhymes in eight years, since he was fired from his job for allegedly ripping off drug dealers as a sideline source of income. According to The New York Post, Williams most recently claimed that he was working in real estate, but cops suspect his death may have had something to do with his association with drug dealers.

Two years ago, 29-year-old Israel Ramirez was working as a security guard while Busta Rhymes was shooting a music video in Brooklyn when he was shot and killed. Police questioned Rhymes about the shooting, but were essentially stonewalled by the rapper. An arrest in the killing of Ramirez has not yet been made.