Another Burial Vault, This One Full Of Coffins, Discovered Near Washington Square Park

On Wednesday night—and for the second time this week—a burial vault was unearthed next to Washington Square Park. This one is full of wooden coffins. The discovery came a day after another 19th-century burial vault was discovered in the same area, containing the remains of at least twelve people.

In both cases, the discovery was made by a crew of Department of Design and Construction workers tasked with upgrading a series of 19th-century water mains near the intersection of Waverly Place and Washington Square Park East.

Both vaults were revealed about three and a half feet below the surface. 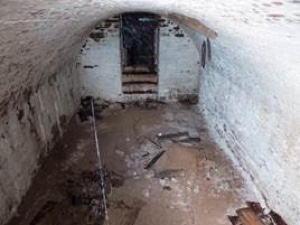 The DDC has brought in a private archeological consultant to spearhead an investigation of the vaults, both of which have been surrounded by protective barriers. Alyssa Loorya of Chyrsalis Archeological Consultants told DNAInfo on Thursday that both vaults likely date back to the late 18th or early 19th Century, when a church cemetery stood at the intersection on the eastern edge of the park.

The cemetery was affiliated with one of two Downtown churches that have long since been demolished, according to Loorya—Pearl Street Church, or Cedar Street Church.

All told, the list of morbid discoveries in and around Washington Square Park—which served as a burial ground for the poor and destitute from 1797 to 1826—is lengthening. Archeologists discovered four bodies in the park in January 2008 while conducting soil tests for a planned park renovation, and a tombstone was excavated from a 6-foot-deep construction site the next fall. The NY Times reports that bones were discovered during the installation of the park's arch in 1895, and again during a Con Ed project in the 1960s.

DDC Commissioner Feniosky Peña-Mora is still hoping to stay on schedule with the water main renovation project, while "minimizing" any impact on the surprise archeological site.

#burial vault
#coffins
#grave
#potter's field
#tombstone
#washington square park
Do you know the scoop? Comment below or Send us a Tip