For the second time in less than a month, staff at a public indoor swimming pool in Brooklyn posted signage indicating that gender-specific swimming hours had been suspended, then reinstated those hours following an influx of 311 complaints.

As was the case with the Metropolitan Pool in Williamsburg in May, NYC Parks Department officials said that the signage was posted in error, that they were investigating the circumstances, and that the city had not condoned a policy change.

The St. John's Recreation Center, near the corner of Troy Avenue on Prospect Place in Bed-Stuy, is one of two public indoor pools in the city that maintains weekly gender-segregated swimming hours, according to the Parks Department. The pool is open only to women on Tuesdays between 7:30 and 9:30 P.M., and only to men on Thursdays, during the same time slot.

A spokesman for the Parks Department could not confirm what guidelines, if any, are used to establish gender-specific swim hours at public pools. 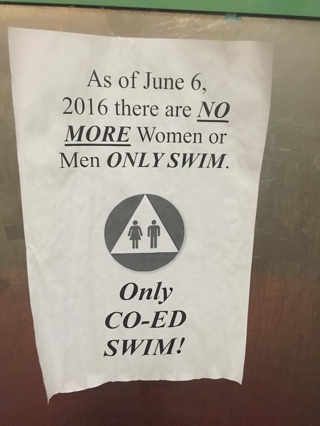 A sign posted in the men's locker room as recently as yesterday (via Tipster).

Confusion came to a head on Tuesday evening, when a few men approached the St. John's pool during hours traditionally designated for women, having read a sign posted on the men's locker-room door that read, "As of June 6, 2016 there are no more women or men only swim. Only co-ed swim!"

Lifeguards turned the confused group away—our tipster was among them—saying that they were not allowed to swim because of their gender. The temporary co-ed policy had been suspended over the weekend, the lifeguards said, following an influx of 311 calls decrying the rule change over the past week.

Our calls to the rec center were referred back to the Parks Department press office, which confirmed that numerous 311 calls came in last week in regards to the signage.

The NYC Commission on Human Rights received a tip last month about the Williamsburg Metropolitan Pool's women-only swimming hours, which they say may be in violation of the NYC Human Rights Law prohibiting discrimination based on gender, race or creed.

The policy was retracted, then swiftly reinstated. In the case of the Metropolitan Pool, the vast majority of patrons are Hasidic. To suspend women-only swim, Brooklyn Assemblyman Dov Hikind argued, is akin to banning women from the pool altogether.

The justification for men-only swim at St. John's Recreation Center is less clear. Parks could not confirm if the hours are maintained as a religious courtesy, though a tipster and long-time pool user told us Wednesday that the pool has a sizable Hasidic membership and that the women-only hours, at least, seem to accommodate those swimmers.

While the Metropolitan Pool accommodates women on weekday mornings, when facilities are less crowded, the gender-specific hours at St. John's fall during peak post-work hours.

"On Tuesdays I can't swim, which can be frustrating," said the 30-year-old tipster. "I can't swim in the morning—my job doesn't accommodate that. At the same time, I can understand accommodating a religious practice."

Parks confirmed last month that it is already in talks with the CCHR about the legality of the practice. Ultimately, the department is hoping to establish a uniform policy for all city pools, to avoid future confusion. Whether that would entail city-wide gender-specific hours or a city-wide ban was not immediately clear.

Reached for comment, a spokesman for the CCHR said that no complaints had been submitted in regards to the St. John's Center hours, but that discussions with Parks about the policy are ongoing.