Another Barneys Customer Says She Was Racially Profiled

Another black Barneys customer has come forward with a story of harassment and intimidation for merely patronizing the store. 21-year-old Kayla Phillips told the Daily News that she bought a $2,500 Céline handbag (tax included) from the Madison Avenue flagship store in February and was confronted by a cadre of police at the subway turnstile as she tried to go home. “There were three men and a woman,” Phillips said. “Two of them attacked me and pushed me against a wall, and the other two appeared in front of me, blocking the turnstile. They were very rough."

NYPD sources confirmed to the News that the department sometimes deploys undercover officers in and around Barneys because credit card fraud is common. This year 53 instances of credit card fraud have been reported, resulting in 47 arrests.

Unlike Trayon Christian, who was handcuffed and held at the precinct after he bought a $350 Ferragamo belt this spring, Phillips wasn't detained by police.

Phillips, a nursing student from Canarsie with one child and another on the way, paid for the bag with a temporary debit card because she had just opened a new account with Bank of America. "They kept asking how I could afford this expensive bag and why had I paid for it with a card with no name on it,” she said.

Not that it's anyone's business, but Phillips told the News that she had just gotten her tax refund in: “I had been looking for that purse in that color for a long time, and it was always out of stock." Phillips has filed a $5 million notice of claim against the NYPD, and another civil rights suit against Barneys and the department is pending.

The News' Denis Hamill writes, "What we need is black celebrity to speak up, especially Jay Z, who has a partnership with the upscale store." Jay Z's "New York Holiday" line features raincoats, double-rings, bags, a cigar humidor, and a $33,900 watch (25% of the profits from the line will go to the Shawn Carter Scholarship Foundation).

Barneys did what any company who is taking documented incidents of racial profiling very seriously would do, and posted a statement on Facebook. 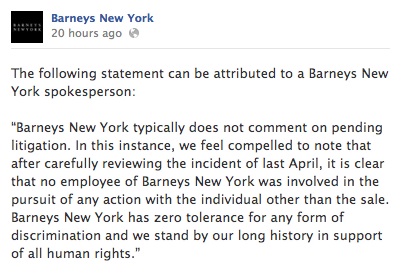 #barneys
#jay-z
#racial profiling
#racism
Do you know the scoop? Comment below or Send us a Tip