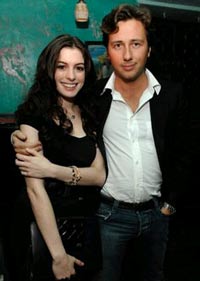 We know from reading our Daily Mail that Hollywood starlet Anne Hathaway broke up with disgraced Italian businessman Raffaello Follieri last week, and not a moment too soon: Follieri has just been arrested (again!) on wire fraud conspiracy and money laundering charges. Earlier this month, the state attorney general’s office acknowledged an investigation into Follieri and his foundation; there is speculation that he misappropriated funds from charity in order to subsidize a lavish lifestyle with Hathaway.

The Get Smart star had previously sat on the board of the foundation, which is involved with vaccinating children in developing countries, among other things. She severed her ties to the board and, later, to Follieri because, as one source told the Daily Mail, “his scandals were hurting her reputation.”

Follieri’s current charges include an accusation that he falsely told an investor that the Vatican had appointed him to manage its financial affairs, enabling him to score heavily discounted deals on Catholic Church property for sale in the U.S.

#anne hathaway
#arrested
#charged
#check fraud
#check kiting
#crime
#foundation
#laundering
#Probe
#Raffaello Follieri
#Ron Burkle
Do you know the scoop? Comment below or Send us a Tip
A new Gothamist is coming! We’ve moved comments over to our beta site. Click here to join the conversation and get a preview of our new website.