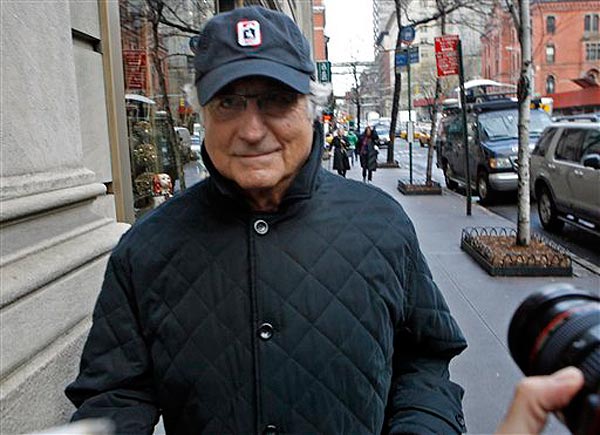 The $50 Billion Ponzi Scheme Man Bernard Madoff is still out on bail but under home detention, which means he's got one those ankle-monitoring bracelets. Plus he has a curfew—between 7 p.m. to 9 a.m., he has to be in the apartment.

Madoff put up his East 64th Street apartment and homes in Palm Beach and the Hamptons for his $10 million bail. The NY Times reports, "The judge also modified the bail so that Mr. Madoff would not need two additional signatures to guarantee the bond, as initially required. Only his wife and his brother Peter, who worked at Mr. Madoff’s firm, had signed the guarantee as of Wednesday morning. His two sons, Mark and Andrew, had refused to sign, according to court papers."

Portfolio's Felix Salmon feels bad for the charities that invested with Madoff, there's an emerging genre of "How Madoff screwed me out of my money" stories and Gawker makes the case that Madoff is like Arrested Development's George Bluth.

#Bernard Madoff
#billions
#fraud
#hedge fund
#Madoff Securities
#ponzi scheme
Do you know the scoop? Comment below or Send us a Tip
A new Gothamist is coming! We’ve moved comments over to our beta site. Click here to join the conversation and get a preview of our new website.