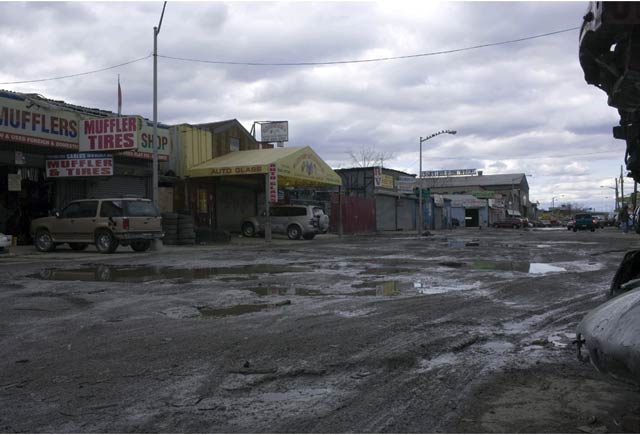 Angry opponents to Mayor Bloomberg’s plan to develop 62 acres of poorly-maintained land in Willets Point, Queens disrupted a press conference yesterday held by city officials in Washington Square Park to tout the proposal. Councilman Hiram Monserrate, whose district includes Willets Point, led over two dozen protesters to the press conference, where they drowned out advocates for the plan, chanting “Justice for Willets Point!” According to the Times, the police refused to remove the protesters, telling officials they had a right to be there, even if they were being disruptive.

The protest coincided with a public hearing held on the mayor’s $3 billion plan to rezone Willets Point to make way for a hotel, convention center, offices and retail stores. Officials say the development will create 5,300 jobs and generate $25 billion in economic activity over 30 years. But 200 small businesses, many of them auto-body shops and industrial outlets, would have to go. Outside the hearing, the NY Times noticed the garbage truck with a banner reading, “Mayor Mike Only Cares About His Rich Developer Friends,” passed by repeatedly, “tooting its horn."

The Willets Points Industry and Realty Association believes it has been denied city services for 50 years and questions why the plan is being pushed when there are many details, like a "final development plan" or developer haven't been chosen. Thirty-two council members sent a letter to the City Planning Commission vowing to vote against the plan if changes aren’t made. Bloomberg told reporters yesterday that of the council members who signed the letter, “there was nobody or almost nobody from Queens" (but 8 Queens members did sign it). The Planning Commission has until the end of September to approve the plan, and then it goes to the City Council.