The L train shutdown nightmare has already begun for some East Village residents who say their neighborhood is being ripped apart by the enormous project. At Monday night’s L train shutdown town hall meeting at a church on Second Avenue, residents lodged a litany of complaints which largely echoed points made in a post by the influential East Village blog EV Grieve from earlier in the day: that their quality of life is being significantly degraded by construction noise and pollution around Avenue A and 14th Street, the main staging site for the L shutdown work.

The town hall meeting began with a statement by City Council Speaker Corey Johnson, who observed, “I think there is a lot of fear around what will happen when the shutdown occurs and I don’t think it is misplaced.” Three hours and dozens of public speakers later, it was apparent the fear is not just about how people will get to where they need to go, but what every day life will be like for many New Yorkers living near the construction site.

For 15 months beginning in April of 2019, the L train will not operate between 8th Avenue in Manhattan and Bedford Avenue in Brooklyn, so the MTA can make replace the tracks and fix the tunnel that was flooded with millions of gallons of water during Sandy.

Keith Powers, the city council representative for Stuyvesant Town and Peter Cooper Village residents admitted, “I think many of my neighbors were surprised to learn this will be a 24/7 construction zone.”

One speaker, Cray Ferguson, who lives at Avenue B and 14th St, said the contractors begin work long before they’re legally permitted. He accused the MTA of “constant lies” and that they “[do] not respond to anything...just the run up to [the L shutdown] is already disruptive and polluting.”

Some speakers feared for their health and safety. Multiple residents voiced a belief that asbestos was being improperly disposed of in dumpsters near their apartments, something New York City Transit president Andy Byford assured them isn’t happening. He promised to post something on the MTA website detailing exactly what materials are being disposed of and that asbestos is not one of them, which requires completely separate disposal teams and procedures due to its high toxicity. “If you all really think that,” he said, “then I think we owe it to you to get something up on the website to get your mind at rest.”

Several citizens also expressed concern about the “considerable truck traffic,” as one put it, that has already inundated the neighborhood. Another said she’s experiencing more headaches and sore throats than usual and cannot open windows out of fear construction dust would enter her apartment. Byford pointed out they simply cannot do the work without trucks bringing materials in and out through the East Village shafts—which will become elevators into the 1st Ave L station after the shutdown is complete—but did offer that at the peak of construction, 30 trucks’ worth of debris will come out of the tunnel per day and 10 will be going in with new material.

Byford also said that although the work inside the tunnel will be 24/7 to try and wrap up the project as quickly as possible, surface-level construction will not be all hours of the day.

Although most of the concerns were specific to the staging site, some themes from the first shutdown meeting in the West Village were once again raised. Several speakers complained about the bike lanes on 12th and 13th Street, with one older man asserting that “if we did enforce our bike laws, we would balance the budget and be able to build all the subways,” which got some of the loudest applause of the night. The NYPD transportation bureau representative—perhaps referring to the overall point about enforcing the bike lanes rather than raising billions of dollars from red light tickets—said this was a “great point.”

Another older man, referring to the bike lanes and the 14th Street busway, asked the MTA and DOT representatives “can we have all of your commitment to put things back the way they were when this is over?” DOT commissioner Polly Trottenberg assured him that anything they were considering making permanent would be brought to the community first, which seemed OK by him. “As long as we get something to say about it, that makes sense.” 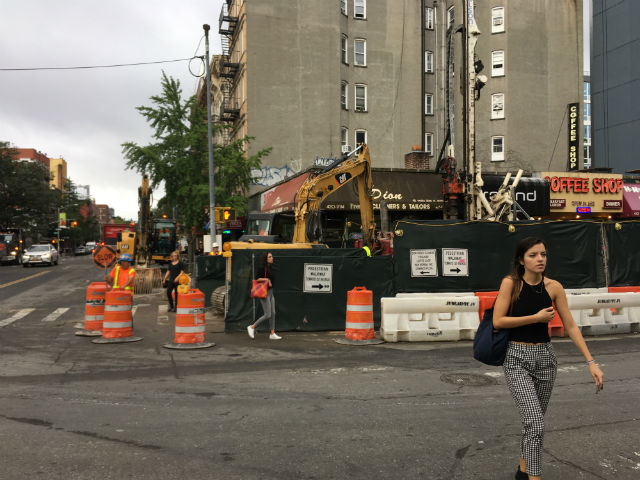 Pollution from the replacement bus services were once again a frequent point of contention, with one woman, Georgette Fleischer, holding her four-and-a-half month old daughter while distressing over the dozens of buses per hour that will pass her apartment during peak hours. “What are you going to say to this child if she gets asthma as a result of this plan?” she demanded of the MTA and DOT officials while imploring them to use more electric buses.

“We are getting as many electric buses as we can,” Byford once again assured. “If there was a way of buying electric buses from somewhere, we would do that.”

He then went on, as the baby cried into the mic, “It’s not that we’re unsympathetic...we’re not the enemy here. We’re not evil. We’re not out to cause problems for your children. I genuinely wish I could get more of those buses.”

Towards the end of the evening, as the umpteenth speaker urged him to do something about the construction noise near Avenue A and 14th, Byford took a moment to make a larger point. “I think one of the reasons I find these sessions invaluable is that you really do sense the vibe, you really get a sense of what is the concern of the community.” He vowed to speak to the project director the next day, addressing the “copious notes” he had been taking on the various points raised. They would move the construction equipment out of the bus stop and ensure the contractor abides by the law on work hours. 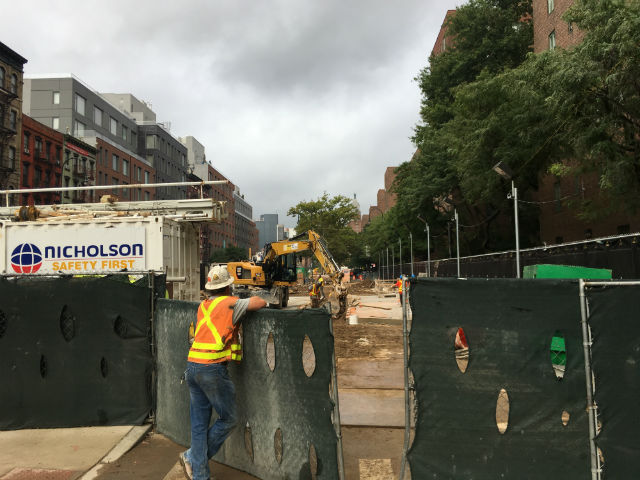 The theme of the evening repeated ad nauseum had been striking a balance; between buses and cars, bicycle lanes and parking spaces, work and noise, pollution and productivity. But there was also a constant search of balance between the speakers and public officials; between empathy and assertiveness, expertise and community, speaking and listening.

“We can’t not do the work because it has to be done,” Byford said, once again trying to find the right balance. “We should be doing it in a considerate manner.”

L train service will be shut down on weekends for preparatory work for the entire month of October, as well as weekends in November, February, and March. There are no more community meetings currently scheduled, but it is likely that will change.

Aaron Gordon is a New York City transportation reporter and writer of Signal Problems, a weekly newsletter on the subway.