Like other public spaces in New York City, it's perfectly legal to take photos at the National 9/11 Memorial. And, like other public space in New York City, some cops will try to tell you otherwise. Meredith Dodson, a Georgia native who relocated to Bed-Stuy six months ago, visited the memorial on September 22nd, and had such a disturbing encounter with an NYPD officer that she was reduced to tears. 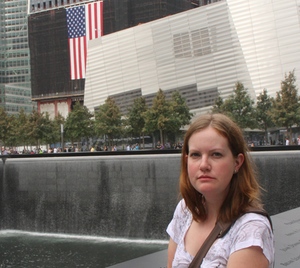 Dodson was on her way out of the memorial when she stopped to take a photo on the long pathway that leads in and out of the site. She says the path is "probably 15-20 feet wide" and she wasn't obstructing anyone's egress when she stopped to take a photo of the "nearby construction hole," as she puts it. (We like to call it the Nearby Money Pit.) That's when, according to Dodson, Officer Mark DeSimone flipped out. In her words:

Immediately the officer called me over to him. He asked me why I would take a picture like that in a tone that was extremely aggressive. I responded as politely as possible: “because I am visiting the memorial and surrounding area." He asked for my license and I promptly gave it to him. He began writing my personal information on a small very unofficial notepad. I asked why I was being detained. He would not answer my question, but only asked again why I would take a picture like that and demanded to see the photo. I showed him the image and responded again that I was visiting the memorial.

I said “I didn't know that there were areas that photography was not allowed. I am still in the fenced-in area of the memorial. There are no signs posted that say no photography. If photography was not allowed in some of the areas that the tourists are allowed, there would be opaque fences instead of transparent mesh or signs posted saying no photography allowed. Most of the area is construction. I was exploring the memorial because I wanted to see how the site was transformed. I have great respect for the new construction of the memorial.” I then offered to delete the photo, however, the officer did not reply, but continued to act aggressively towards me.

Dodson describes DeSimone as a six foot tall, muscular man with a "pretty imposing figure" who "got right in my face." She says that DeSimone was shouting at her, inches from her face, and when her friend asked if he had a card, he became "even more aggressive." Dodson's friend then told the officer he was going to take a cell phone photo to document his name and badge number, at which point DeSimone "yelled at my friend to stop taking his photo and that he would arrest us all for trespassing." He then ordered Dodson's friend and husband to leave the memorial, and continued to detain her for roughly twenty minutes. She continues:

The officer continued to berate me and stood within inches of my face to yell at me and say how he had lost many friends on 911 and he just barely survived and how he was protecting the area from terrorists. He asked me where I was from (I said Georgia) and he said he was from Alabama and that I should know not to take pictures through a mesh. I said I didn't know about a no photography rule for inside the area. I was crying by this point and asked why I was still being detained and was I begin charged with anything.

He did not answer my question and continued to threaten me by saying that he would do a background check and that he could arrest us and charge my friends and me with trespassing. He said that "my friends are assholes" and that if they came back there would be problems. I didn't understand why he was continuing to be so aggressive towards me. My husband and friend had already left the area (about 50 feet away) and I was certainly not being anything but polite to him. I didn't even know why he was threatening me with these things especially since I had already had the background check to be allowed into the area. I signed up for tickets two weeks prior and was still in the cordoned area where all the tourists were. I didn't even attempt to go into an area that I wasn't allowed. I took a picture from inside the visitor area.

After about 20 minutes, Dodson says Officer DeSimone finally permitted her to leave. She spoke with another officer outside the memorial, and this cop pointed out that the entire area she photographed is visible from the W Hotel, the Millennium Hilton and even from the stillspotting exhibit/event which has a "stillspot" in 7 World Trade Center overlooking the construction site.

"It's really troubling to me because I take a lot of photos," Dodson tells us. "And I was taking a photo in an area where people go to take photos! So it's really concerning to me that people's rights to take photos are being depleted so aggressively." The NYPD has not responded to requests for comment, but a website for the World Police and Fire Games features a small profile on DeSimone, noting that "in 2003, Mark began to experience some ill effects from the aftermath of 9/11. Inspired by an article on an NYPD Captain who participated in Triathlons, he began to train in an effort to offset the and participated in his first event that same year. Since then, he has competed in numerous triathlons all around the country."

A spokesman for the memorial tells us, "There are no rules against photography on the site unless it poses some security risk."