It wasn’t quite a “blue wave,” but it was enough to lap the shores of southern Brooklyn on Tuesday night, where Democratic challenger Andrew Gounardes appears to have unseated 16-year incumbent Republican Marty Golden in New York’s 22nd state senate district. Though Golden declined to concede before the end of the night, Gounardes was ahead by 1,129 votes with all precincts reporting. Gounardes’s victory would contribute to the eight member majority that the Democrats will now enjoy in the New York State Senate.

The Gounardes victory party at Cebu Bar and Bistro on 3rd Avenue in Bay Ridge erupted in joy and chants of “Andrew! Andrew!” as Golden’s lead in the early precincts dwindled over the course of the night. The final polling sites to report were those in diverse parts of Bay Ridge, which put Gounardes over the top.

“I’m overwhelmed,” Gounardes told Gothamist after his victory speech, “I’m honored that my neighbors, the people of southern Brooklyn have chosen me to represent them up in Albany.”

But Golden has thus far refused to concede, claiming there are 3,000 paper ballots that had not yet been counted. In a speech last night, Golden told his supporters, “This is not over.”

“God is good. Whatever happens, happens,” Golden told City Limits. “I do believe I’m going to win this, I hope for my community and for the people I represent, for this great state, I do win, and we’ll see what happens.”

“Immigrant voters came out today to demand dignity and respect, to stand up to hate and divisiveness. And we delivered two key victories for the Democrats,” said Murad Awawdeh, Political Director of the NYS Immigrant Action Fund. “Max Rose and Andrew Gounardes were carried over the victory line because of the immense amount of immigrant voters who came out to cast their ballots for them. We’re proud of the campaign we ran to turn out the Arab, Muslim, Latino, and African communities.”

By contrast, Golden, a former NYPD officer, has vociferously defended some of Donald Trump’s most xenophobic policies, including the Muslim ban. In a recent debate, he likened pro-transgender politicians to “Martians from Mars.” 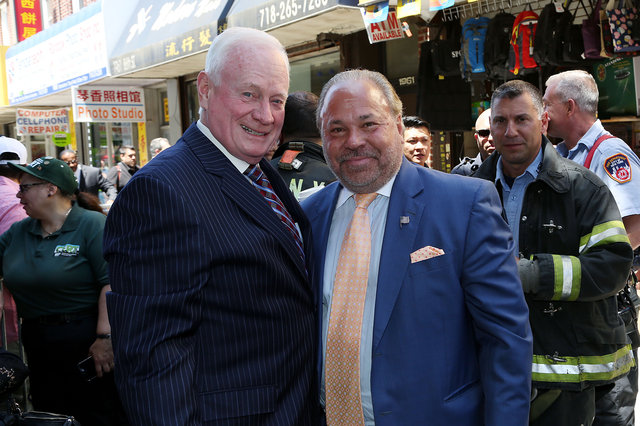 Golden, who has often won elections on the strength of his charm and ubiquity at neighborhood events alone, faced contradictory obligations this time around: showing fealty to the Trumpian base of the GOP while maintaining support from the older, conservative Democrats in South Brooklyn who have historically carried him to victory. In 2016, Trump won district 22 by less than one percent.

National conversations about rising white nationalism and anti-Semitism also intruded upon the race in ways that harmed team Golden, who preferred to focus on his local achievements. In March, Golden was forced to fire staffer Anthony Testaverde after he compared Parkland shooting survivors to the Hitler Youth on Facebook. In October, Golden ignored calls to fire campaign office manager Ian Reilly, a young operative who invited the far-right provocateur Gavin McInnes to speak at the Metropolitan Republican Club—an event which culminated in violent clashes between McInnes's pro-Trump 'Proud Boys' and antifascist protesters.

“This just feels like a weight off,” said Karen Tadross, a former Republican who lives next door to Golden but supports Gounardes. “In the last two years, I’ve seen my neighborhood transform, and not in a good way.”

Tadross says her political views have evolved since she founded the non-profit Bay Ridge Cares with Gounardes and City Councilman Justin Brannan in 2012. She was in tears as evidence of Gounardes’s victory set in last night. “I want my community to have a conscience,” she told me. “Now it does.”

In the last few hours of voting, we stood outside P.S. 264 on 89th St. in Bay Ridge, watching as Gounardes greeted voter after voter— teenagers in hijab, families pushing strollers, older voters helped through the rain by grown daughters and sons. I could barely get a word in with the candidate as he flitted from voter to voter, flashing a toothy grin and introducing himself. His mother, Diane, an early childhood educator, stood to the side under an umbrella. “One thing you can say about Andrew is he listens,” she said, watching her son in his element. “That makes all the difference in the world to people. They want to be heard.”

Despite a late night, Gounardes was up this morning, coffee in hand, greeting his likely soon-to-be constituents as they arrived at the train. “Is it official?” one young woman asked as she passed.

“It’ll be official in about a week, but we’re up by 1,200 votes,” Gounardes replied with a stern nod. As the young Brooklynite descended the stairs, he called after her, “Thanks for voting,” and turned to greet another.

#Andrew Gounardes
#bay ridge
#Marty Golden
#south brooklyn
#state senate
#original
Do you know the scoop? Comment below or Send us a Tip