An Old Secret May Soon Be A New Manhattan "Half Avenue"

Thanks to the Department of Transportation, Midtown Manhattan is about to get a new pedestrian thoroughfare. Well, an old one rebranded. So, before you get out your pitchforks and start burning effigies of Commissioner Janette Sadik-Kahn, take a deep breath. The path, which the Observer dubs "6 1/2 Avenue", has long been known to the district's denizens. All the DOT wants to do is make it easier to find and walk. 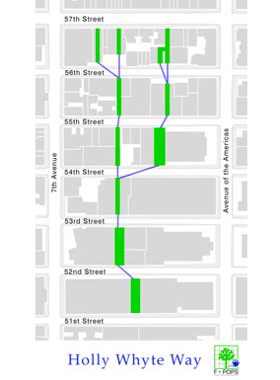 An early mock-up of the strip. What the DOT wants to work with is just the line running north to south, like this.

If all goes according to plan, soon enough the already existing mid-block paths between 51st and 57th Streets between Sixth and Seventh Avenues will be connected and emphasized via better signage, curb cuts and possibly some stop signs or lights. The Friends of Privately Owned Public Space, which has been instrumental in getting the DOT's attention, has already dubbed the strip Holly Whyte Way, after the urban planner.

Of course, many Midtown workers are already well aware of the walkways (they really do make getting around easier) and probably aren't going to love them getting more attention, but what can you do? The New Yorker has been blowing up "secret" pathways like this for years.

Interestingly, the alley-like pathway actually connects to the issues facing the Occupy protestors at Zuccotti Park. The strips of land being discussed here are all Privately-Owned Public Spaces (POPS), just like Zuccotti, that were created as part of deals that allowed developers to build extra-tall in dense areas. What this plan tries to do is just bring them all together in a coherent manner (clever planners way back when already assured that most of them line up nicely). And it looks like it could happen! According to Commissioner Sadik-Khan, the city had conferred with every building owner and, she said, "the response has been good to neutral."

The only concern we have with the plan? Making sure that all of the buildings involved in the 6 1/2 Avenue strip start keeping the same hours. Getting cockblocked by a closed gate on 54th Street would be very frustrating.

#dot
#janette sadik-kahn
#manhattan
#midtown
#parks
#pops
#privately owned public space
Do you know the scoop? Comment below or Send us a Tip