An Elegy for the Pay Phone

In our advanced age, street pay phones are often thought of as grimy relics of a bygone era—something between a public toilet and a closet-sized museum. Still, measured up against touch-screens and T9, they seem incredibly romantic. One pay phone outside of a Queens courthouse still swallows its fair share of quarters, and a Times reporter spent a week eavesdropping from the sidewalk. As one might expect, lots of people called after their run-ins with the law. “I do drugs,” said one man. “I got caught with them.” Others conduct their shady dealings. “Nah,” one young man said after hanging up, “you didn’t see me use that phone.” “Loneliness, loneliness, loneliness,” responded another man when asked why he was calling. He'd tried to reach his son, but was met by an automated response. See a map of the city’s payphones by zip code after the break. 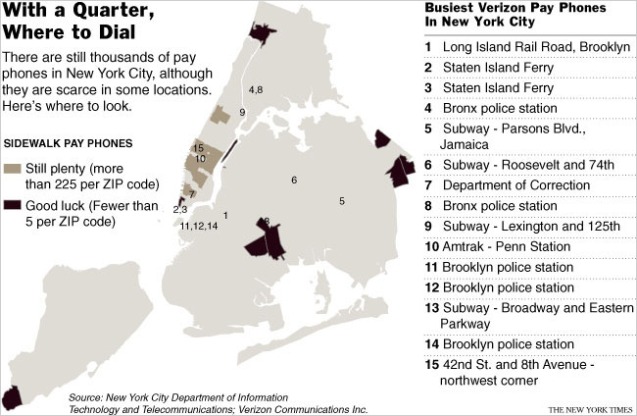 There are 16,358 pay phones left on city pavement, according to the Department of Information Technology and Telecommunications. That’s down from 33,335 in 2000 and 28,971 in 2004. More—housed inside bars, restaurants and other buildings—go unregulated. Verizon operates most of them: it has records for 7,000 outdoors and 18,000 more in subway stations and buildings. See more pictures here and here.

During the reporter’s seven-day surveillance on Queens Boulevard more than 100 people deposited a total of $52 (calls still cost a quarter, that much hasn’t changed—though there's been a small movement to make calls free). Most were men, and they ranged in age from 18 to 62. Some were unemployed and couldn’t afford a cellphone, others didn’t have their cellphones. “Cellphones have not killed the business,” said Mr. Steiner, 62, the former president of the Independent Payphone Association of New York. “It certainly has reduced it.”

#cellphone
#change
#court house
#pay phone
#quarter
#queens
#queens boulevard
#verizon
Do you know the scoop? Comment below or Send us a Tip