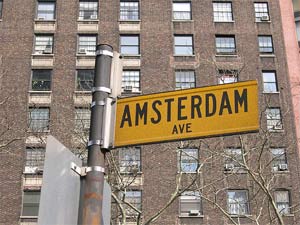 On a recent weekend, we saw Jacques Torres loading boxes of delectable treats from a van into his new store Jacques Torres Chocolate store at 285 Amsterdam Avenue, near 73rd Street, leaving us impressed at his commitment as a small business owner. Today, the chocolatier and the store are mentioned in a NY Times article that examines the emergence of Amsterdam Avenue as an option for retailers, who have traditionally been attracted to Broadway and Columbus Avenues for Upper West Side locations.

Amsterdam has long been a boulevard for what the Times calls "bodegas, dry cleaners and ethnic restaurants." On one stretch between West 79th and West 86th, the avenue becomes a virtual alley of bars and restaurants that doesn't have the most fans, including what Alec Baldwin thinks. He recently called Amsterdam Avenue "pretty horrible" and we don't think he's entirely overstating the case.

One reason why retailers haven't like Amsterdam Avenue is the "fortresslike feeling" from larger buildings "like the Jewish Community Center in Manhattan, Riverside Memorial Chapel, the Apple Bank building and the backside of the Beacon Theatre." But Amsterdam seems to be getting a new look from bigger potential commercial tenants because of more new projects, which means bigger spaces - for instance, Whole Foods heading to West 97th in a controversial project.

Other building managers are looking to update their buildings - or at least ground floor retail spaces to offer new tenants better amenities. Torres' shop is situated in a building that has undergone an attractive facelift, a no-brainer since it's close to the West 72nd Street 1, 2, and 3 subway station and therefore has more foot traffic. At any rate, rents on Amsterdam Avenue are still much cheaper than Broadway, but they are starting to creep up.