Despite lingering opposition from dozens of locals, last night the Upper West Side's Community Board 7 voted in favor of a DOT redesign plan for Amsterdam Avenue between 72nd Street to 110th Street. The redesign [PDF] will create a protected, north-bound bike lane along the 30-block stretch, buffered by a parking island.

Motor vehicle traffic will be reduced from four lanes to three, and parking space on the avenue will be diminished by 21%.

Among last night's 'no' votes were CB7 transportation committee co-chairs Dan Zweig and Andrew Albert. Last month, a few days before 73-year-old Thomas McAnulty was fatally struck by a motorcycle driver while crossing 96th Street at Amsterdam Avenue, their committee reached a split 4-4 vote on the DOT's proposal. Both co-chairs denied this month—not for the first time—the validity of DOT data showing increased safety as the result of protected bike lanes.

Zweig and Albert voted in favor of a 2013 resolution calling for a safety study of Amsterdam Avenue. (“Some things need to be done for pedestrians now,” Zweig said at the time, calling for curb extensions over a protected lane.)

The final vote on Tuesday was 28-13 in favor with two abstentions, and concluded a years-long debate that was heated until the last minute. As safe-streets advocates pressed shoulder to shoulder and dozens deep—the majority of them wearing bright-yellow #FixAmsterdam stickers supplied by the advocacy group Transportation Alternatives—a fire marshal arrived and ordered about 100 people to leave.

Some attendees called for the meeting to be rescheduled, while others shouted "check the zip codes," hoping that anyone from outside the district would be kicked out. Undeterred, several Transportation Alternatives members crouched at street level, reaching through the conference room windows with signs reading "Safety is the #1 priority."

A hiss rose from the crowd of TransAlt members and their supporters when anyone opposed to the bike lane took the mic, and applause for those in favor was raucous. Some residents countered that TransAlt had co-opted their meeting, "peppering" the audience with advocates from out of district.

These claims were drowned out by screams of, "Liar! We live here!" and "This is slander! Sit down!" While many advocates from across the city attended the meeting, several leaders of the advocacy group Families For Safe Streets, including founding member Mary-Beth Kelly, are UWS residents.

According to the DOT, 59% of drivers speed on Amsterdam Avenue during off-peak hours. The road saw 513 traffic injuries—36 of which were severe—between 2009 and 2013. Four-year-old Ariel Russo was fatally struck by an unlicensed driver when he jumped the curb at Amsterdam Avenue and 97th Street in 2013.

Resident Rita Callahan put it this way in her testimony: "I live on Amsterdam Highway." 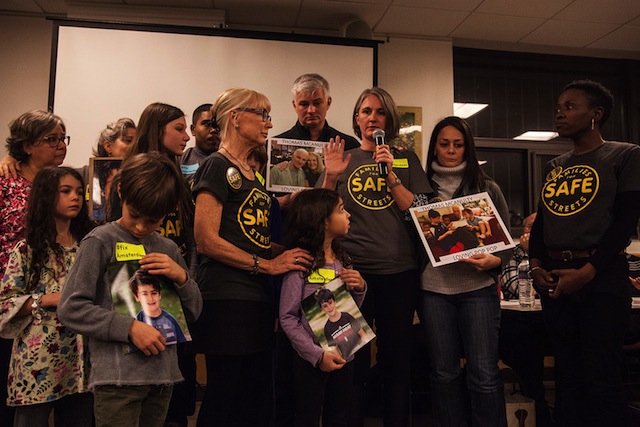 Voices shaking, McAnulty's children, Kathleen and Steve McAnulty, testified before the board as the newest members of Families For Safe Streets—an organization for victims of traffic crashes and their families.

"I can't believe we're standing up here," Kathleen said. "It will be three weeks [since my father's death] on Thursday. I grew up in this neighborhood. We've always known that Amsterdam has been crazy. We've been here for 35 years. And my father was hit right on 96th and Amsterdam, demolished, killed, done. Something has to be done."

McAnulty added, "I really cannot image what the arguments are against it… I hope they are not parking."

"What's going to happen with the cars circling our side streets looking for parking?" countered co-chair Albert on Tuesday, as if on cue. "Where are all of the cars going to go? There won't be any spaces anymore."

"The proposal from DOT makes for a safer route, but it imposes a lot of very real problems on the neighborhood. One of the problems is 21% parking reduction," Zweig echoed.

Other neighbors and local business owners opposed to the plan said they anticipated increased congestion as a result of the bike lane. "NYC was built on commerce," said resident Daniel Hank. "This was built as a port of commerce, not for biking. Want to bike? Go on the bike paths."

"What happens is traffic creates pollution," said Joseph Bolanos, a community advocate and longtime resident of 76th Street. "You're going to have slower traffic and more pollution air and noise."

"Amsterdam is an established artery," he elaborated afterwards. "It’s a dedicated truck route, so it provides commerce for all of the restaurants and stores."

A spokesman for the DOT cited the favorable green-light progression on Amsterdam Avenue, which would be maintained, as well as a potential shift from taxis to Citi Bikes in the coming months, as evidence that congestion would not worsen. 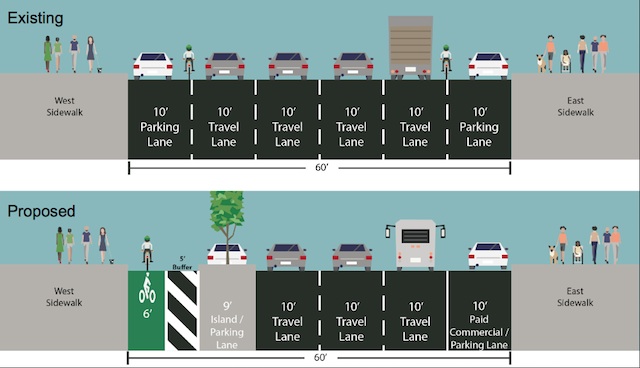 A southbound protected bike lane was installed on Columbus Avenue in 2010 and extended in 2013, also against considerable pushback from some vocal Upper West Siders.

Some locals said on Tuesday that they seldom see bikers on Columbus Avenue—proof that bike lanes should not take priority in the neighborhood. Bicycle traffic aside, a spokesman for the DOT described the bike lane as a crucial traffic-calming measure. "I think the safety numbers are really what we should be focusing on," he said.

According to the DOT, protected bike lanes reduced total injuries along Columbus Avenue between West 96th Street and West 77th Street by 20% in three years. Pedestrian injuries are down 22%.

"At times this has felt like defending climate change," said resident Richard Fine. "With all of the facts on one side versus someone saying, 'I talked to a guy the other day.'"

During the final hour of debate on Tuesday, board member Shelly Fine introduced an alternate proposal—rejected by a 28-15 vote—that called for safety measures like curb extensions and additional traffic signals in lieu of a bike lane.

"We all want safety," he said. But the current plan "ignores the reality that Amsterdam is a major truck route and car route going north and out of the city and that's not going to change."

Board member Brian Jenks described the alternative plan as a step in the wrong direction. "It is high time New York modernized its streets," he said. "We need to shift the way we commute in this city. It's a sea change, it's going to happen, and it should happen now."

Filing out of the meeting after 10:00 p.m., Bolanos, who earlier predicted the changes would result in more congestion, called the decision "a victory for pollution."

"I'm thrilled that the lane was passed," said Kathleen McAnulty, standing a few feet away. "It's very upsetting to hear, when you're in this process of grieving, that people are unable to put into perspective real life grief. It was hard to hear over and over and over again about parking."

The DOT plans to begin construction on the new lane this spring, and complete two miles of protected bike lanes on Amsterdam in 2016.

#Amsterdam Avenue
#dot
#transportation alternatives
#original
Do you know the scoop? Comment below or Send us a Tip