American Museum Of Natural History Evacuated After A Fire

(Photo by Margot of Chelsea)

[UPDATE BELOW] There was a fire at The American Museum of Natural History late this afternoon. The FDNY tells us the call came in at 3:25 p.m., and the fire was on the 4th floor, which houses the dinosaurs, mammals, a cafe, and a research library. While it has been put out, a lot of smoke remains. There are no injuries reported at this time. 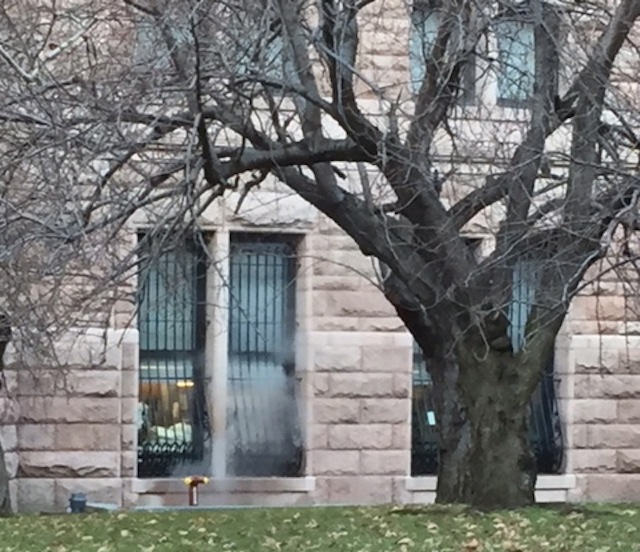 (Photo by Margot of Chelsea)

Tipster Margot sent in these photos, saying, "I was visiting the Museum when suddenly sirens started going off and the entire building was evacuated. Smoke was billowing out one of the windows and firemen are everywhere." As of just before 4 p.m., the Museum is still closed to both employees and the public.

Someone save @neiltyson! RT @PopSci AMNH is "filling up with smoke," we hear from a source... Museum is being evacuated! @jtotheizzoe @mmoyr

UPDATE: The Museum has sent out a statement, noting that everyone was "safely evacuated today as a result of a smoke condition in the Hall of Northwest Coast Indians, located on the first floor. The evacuation, which began at 3:21 pm, was accomplished in less than five minutes. Approximately 3,000-4,000 people were in the Museum at the time, and no injuries were reported.

There was no fire inside the building, but two sprinklers did deploy in a contained area of the hall as a result of the smoke. The Museum will be immediately assessing the condition of the hall.

#amnh
#fdny
#fire
#museum of natural history
#original
Do you know the scoop? Comment below or Send us a Tip