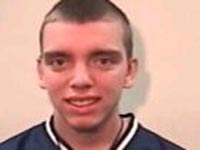 Colin Leahy, who never made it past the audition round during the third season of American Idol, is accused of having "inappropriate interaction with students" at P.S. 236 in Brooklyn. Leahy, a 23-year-old school volunteer, was charged with two counts of child endangerment.

According to school investigators, Leahy sent text messages with sexual references to a 12-year-old male student, some inquiring whether the child was gay--the Daily News reports,"Leahy allegedly told investigators he was 'just curious'" about the boy's sexuality.Leahy also allegedly took two 10-year-old students to the movies and made references to oral sex (he reportedly said he was "joking".)

During his audition on American Idol, Leahy said he was lot like Clay Aiken, because he too likes to work with kids (video below):

The News adds that while the students say Leahy didn't molest them, "one said Leahy had accidentally punched him between the legs when they went to see a movie together." The Department of Education has placed Leahy on its list of ineligible volunteers.

#American Idol
#brooklyn
#child endangerment
#department of education
#school volunteer
#text message
Do you know the scoop? Comment below or Send us a Tip