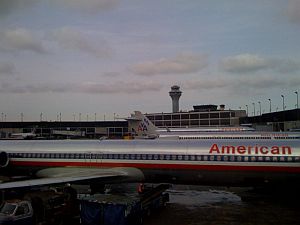 An American Airlines flight from Miami to LaGuardia Sunday night was canceled due to the passengers' collective rudeness. Fox 5 has it that a flight crew was so late getting to the plane that upon arrival they were greeted with raucous booing from the impatient passengers. So the crew decided to teach the rabble a lesson in manners and refused to work the flight for the “hostile mob.”

A replacement flight crew could not be assembled, and the passengers were put up in a hotel for the night, which was nice except for all the “barbed-wire all around it,” according to one witness. They didn’t end up getting to LaGuardia until the following evening, on a flight that was presumably marked by pin drop silence and perfect etiquette. But American wasn’t done with them yet – as one final kick in the teeth, the airline sent their luggage to JFK by “mistake.”

#american airlines
#BOO
#booing
#cancel
#flight
#flight crew
#rude
Do you know the scoop? Comment below or Send us a Tip