Approximately 50,000 people spend the night in New York City homeless shelters, according to the city’s Department of Homeless Services. More than 40,000 are there with their families, including 21,600 children, while 9,000 are single adults. And according to a distressing article in today's Times, an increasing number of them are employed—some even work two jobs before returning to the shelter in time for curfew.

"New York City is the hardest city to live in," says Alpha Manzueta, a New York-native who has lived in the shelter system for the past three years. Manzueta, who has a two year old daughter, works two security guard jobs—one that ends at 7 a.m. and a second that starts at noon. "I feel stuck," she tells the Times, echoing the sentiment voiced by many struggling to get a foothold in a city where the rent is increasingly obscene.

The number of working homeless New Yorkers has risen dramatically in recent years, according to City data that the Coalition for the Homeless obtained through a freedom of information request. Between November 2010 and July 2013, the number of homeless households residing each night in municipal shelters grew by 57 percent, from 3,003 to 4,700 working households. 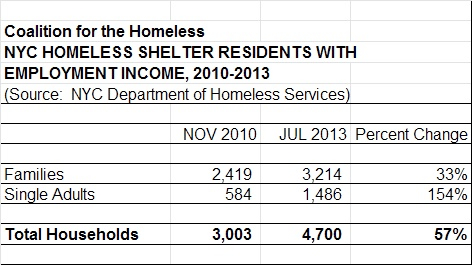 "A one-bedroom in East New York or the South Bronx is still $1,000 a month,” Patrick Markee, senior policy analyst with the Coalition for the Homeless, says. “The jobs aren’t enough to get people out of homelessness." And there certainly aren't enough software programmers out there to teach homeless people how to code. It's a sobering, upsetting article—read it in full here.