Yesterday more court papers were filed for the upcoming American Apparel/Woody Allen showdown, and the NY Post's Cindy Adams thinks it's going to get uglier than a Nylon Spandex Micro-Mesh Bodysuit.

To recap: after the retailer used an unauthorized image of Allen on billboards (he won't even lend his image to the I Love NY campaign), the director filed a $10 million lawsuit and called them "sleezy" amongst other things. American Apparel's lawyer Stuart Slotnick, the only one to speak out from the company thus far, has said Allen isn't worth that kind of money since he "devalued his reputation by becoming involved with his lover Mia Farrow's adopted daughter Soon-Yi Previn, whom he later married." Slotnick also may or may not have requested nude photos Allen allegedly took of Previn, though this was probably just for Dov Charney's personal collection (unsubstantiated!).

The case goes to court on May 18th, and apparently the defense is prepared to use Mia Farrow's memoir as proof that Allen has a "clear inability to discuss the value of any endorsement or much else outside the realm of the purely creative," since Farrow noted he had an "evident lack of familiarity with the most basic details of day-to-day existence." However, we just got this internal memo that American Apparel sent out to employees this morning, and you guys, everything is going to be okay, "Dov (and everyone else at the company) LOVES Woody Allen." That, and much more, is explained in the full memo (after the jump). 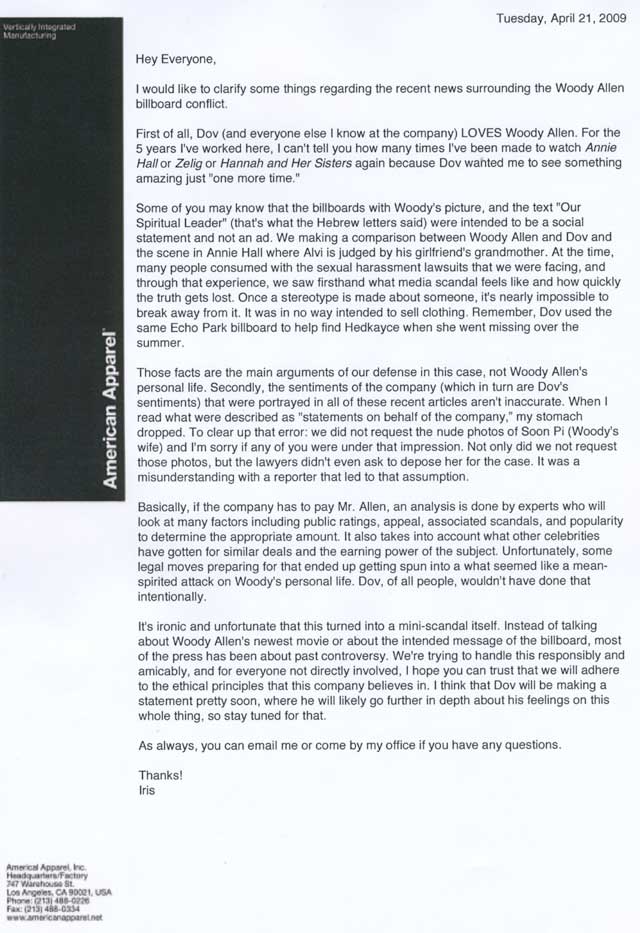 #american apparel
#court
#dov charney
#lawsuit
#woody allen
Do you know the scoop? Comment below or Send us a Tip