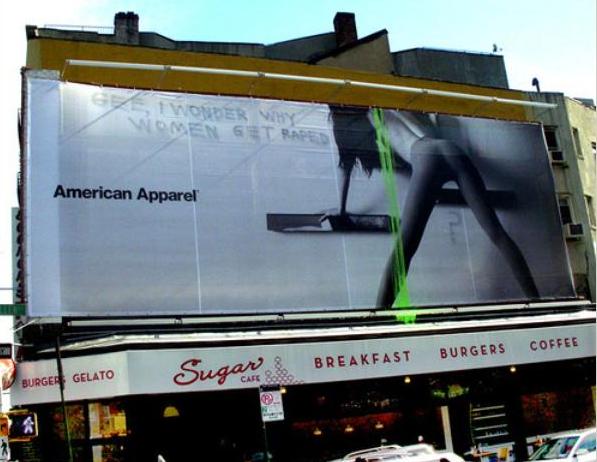 Remember when one of the many American Apparel ads on Allen and Houston was defaced with the words "Gee, I wonder why women get raped"? The ad was replaced with a new one soon after, and not much more was heard about the mystery messenger. Until now. Yesterday Jezebel received an email from someone purporting to be the one who held the spray can. He stated:

First off, i'm not a graf writer. Honestly, I was just reacting to the constantly degrading images of women that AA creates. That ad in particular - headless, bent over, composed so that the focus was irrefutable... I went home, grabbed some spraypaint, took the train back and waited until 4am to climb the scaffolding.

Now that i've read all of the comments and reactions posted on jezebel, i feel regret at having chosen the word "get". The people who mentioned "are" as a better choice of wording were right. I struggled with the thought of leaving such an open-to-interpretation message, but eventually just decided to go with my gut-reaction and get the hell down from there.

He adds that the act of civil disobedience probably cost American Apparel up to $10,000 and that his form of protest was effective. No word on who's responsible for the green splash though.