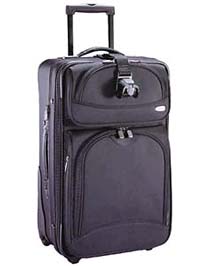 Yesterday, American Airlines started charging customers $15 for the first checked bag, a controversial but necessary move given rising oil prices (American, like many other airline carriers, also charges $25 for the second checked bag). Though full fare, gold/platinum frequent fliers, first and business class customers, are exempt from the fee, American expects 25% of its customers to be affected by the charge. And those fliers were not happy.

One traveler at LaGuardia told the Daily News as she tried "to stuff the contents of two bags into one," "I think it's rude when people bring large carry-ons, but now I'll be one of them." Then she added, "Part of airline travel is luggage. It's not the subway! Obviously, you're going somewhere and you need to bring things."

How fair are the new charges? USA Today travel columnist David Grossman takes up the issue and breaks down some costs:

A Boeing 767 flying one way from New York to Los Angeles consumes approximately 9,000 gallons of jet fuel. If 150 passengers are aboard, that equates to 60 gallons of jet fuel per passenger. At the current price of $4 per gallon of jet fuel, the fuel cost of that one-way flight is $240, or $480 round trip per passenger. But that's just the fuel cost and does not include the cost of owning and maintaining the airplane, plus all the computer systems, facilities and employees necessary to make the journey possible.

Grossman goes on to say, according to the Air Transport Association, since fuel is about 40% of airline costs, in this scenario "the total cost of operating that flight exceeds over $1,000 per passenger" (round-trip). Which makes those low fares you've been paying a steal and unsustainable.