American Airlines is taking tips from United on how to lick up any last drop of dignity left in air travel—the airline has announced a new lower-cost fare class that doesn't include use of the overhead bins for carry-on luggage.

In a press release, the airline said it will start offering Basic Economy fares in February. These "no-frills tickets" will be the cheapest available, and won't allow you to pick a seat in advance or be eligible for upgrades. More irritatingly, passengers will only be able to bring a personal item, like a backpack or purse, that will fit under their seats—overhead compartments are only available for folks paying higher fares. If your carry-on doesn't store under your seat, you'll have to pay a standard checked bag fee plus an extra $25 to check it at the gate. 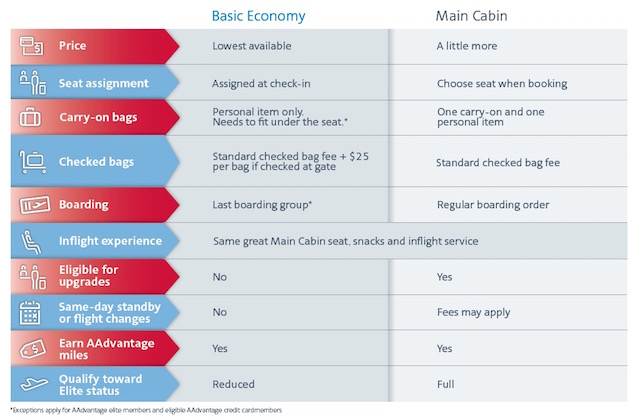 American Airlines says this new move will help them compete with ultra-low cost airlines like Southwest and Spirit, a claim United Airlines made last year when they announced they'd start charging "Basic Economy" travelers for overhead bin access. It's not clear what the "lowest available" ticket price means—it's possible "Basic Economy" ticket prices will be super low while Main Cabin prices remain the same, but knowing airlines, there's a solid chance the lowest ticket prices will tick down just slightly, while Main Cabin prices will increase a tad.

This is just one item on a long list of ways airlines have been gradually testing our humanity over the years, as Senator Chuck Schumer so succinctly pointed out last month when United announced their "Basic Economy" plan.

"The overhead bin is one of the last sacred conveniences of air travel and the fact that United Airlines—and potentially others—plan to take that convenience away unless you pay up is really troubling," Schumer told reporters. "Already, airlines charge extra for checked luggage, pillows, peanuts, and head phones and now you'll have nowhere to store them. United Airlines should reverse this plan and allow the free use of the overhead bin for all."

United has not taken Schumer's words to heart, though, and now American's on the overhead bin ban bandwagon. It's only a matter of time until we're all flying across the globe in torturous "standing seats" with naught but a stale packet of pretzels for our troubles.

#airplane travel
#american airlines
#come on
#united airlines
#why god
Do you know the scoop? Comment below or Send us a Tip