Spilled soda, among other things, is to blame for an embarrassing problem with the seats on American Airlines' fleet of Boeing 757s. After loose seats forced emergency landings on two American flights in a week, the bankrupt airline claimed the problem was due to a clamp that holds rows of seats to tracks on the aircraft floor. But yesterday officials gave a new explanation, telling CBS that "a combination of wear, poor design and even soda spilled into the tracks caused pins to pop out of the grooves." Get ready to pay extra for a Sippy Cup surcharge. 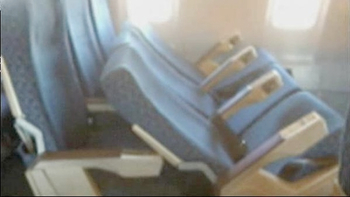 American cancelled dozens of flights this week as it scrambled to fix the problem, which the airline promises will be resolved by Saturday, less than a week before this blogger's American Airlines flight to Miami. Of course, that important vacation, foolishly booked on the nation's shittiest airline in an ill-advised attempt to save a few bucks, could also be endangered by an ongoing labor dispute between the airline and the pilots' union. Earlier this month a bankruptcy court judge ruled that American Airlines could cancel its contract with the pilots, and a new contract proposed by the airline was rejected by the union.

The labor dispute may have contributed to American experiencing more delays than any other airline last month. Just 59.08 percent of their flights arrived within 15 minutes of scheduled arrival times in September, the lowest of any North American airline, and the South Florida Business Journal reports that the airline experienced 21,237 delays and 1,391 cancellations last month.

The pilots' union insists it did not sanction any slowdowns. And American Airlines insists the problems with the seats is unrelated to the labor dispute. It's totally the soda people are sloshing around mid-flight. Somewhere at this very moment Mayor Bloomberg is smiling smugly to himself.

#air travel
#american airlines
#loose seats
Do you know the scoop? Comment below or Send us a Tip
A new Gothamist is coming! We’ve moved comments over to our beta site. Click here to join the conversation and get a preview of our new website.