Ambien Zombie? Kerry Kennedy "Completely Out Of It" During Crash

Kerry Kennedy is expected to plead not guilty to driving under the influence of drugs, which she was charged with when she crashed into a tractor-trailer on Westchester County's I-684 last week. State police say that Kennedy fled the scene and was later found with her disabled car. Her spokesman says she was not on drugs—Kennedy supporters are trying to forward a "seizure" explanation—but the truck driver she hit says, "My first impression was that she was really, really drunk."

Rocco Scuiletti told the Post that the "erratic Kennedy terrorized him and other drivers for more than three miles before crashing, careering off Interstate 684 and being busted by cops." He explained, "I’ve been a truck driver for 22 years. I’m pretty sure she was half-asleep or very, very intoxicated... She scared the heck out of a lot of people. She was completely out of it." 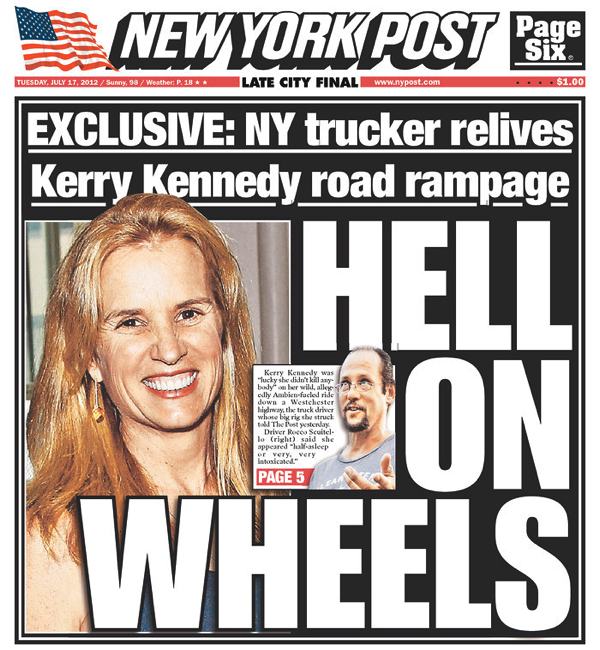 Kennedy apparently told cops who responded to the scene that she took an Ambien, the prescription sleep aid that can turns give users "a tendency to stare zombie-like and run into stationary objects." Scuiletti, who said she "looked like she just rolled out of bed," described how Kennedy, on the far left lane, drifted into the center, while he was in the far right lane, and then towards him in the right. She went back to the center lane, but not for long:

"She started coming at me again, like she didn’t see me. She was starting to nod off, her head was bobbing toward the steering wheel.

“I hit the horn. I couldn’t go back into the breakdown lane because there was a disabled truck up ahead. I could either hit that truck or let her do whatever she was going to do.

“When she hit me, my left tire tore up her passenger-side door, and the lug nuts on my truck tore up her tire — just shredded through it and peeled the tire right off.

Apparently Kennedy's tire totally came off ("You could barely see her car, there was so much smoke"), and he says she "[cut] off at least three people off. At Exit 3, she suddenly shot over to the right at the last minute, cutting off another car and barely missing it." Before authorities found her "slumped" over the wheel, she had reversed into the guardrail.

The Journal News reports, "[A source] close to the situation disputed that Kennedy ever told police she took Ambien, saying that Kennedy only told police that she might have mixed up her medications. Kennedy also planned to be examined by doctors to determine whether she fainted, had a seizure, or had some other unknown medical event during the incident, according to the source." In turn, the state police's source says the "signs were there" for them to deem she was driving under the influence.

Kennedy is one of the Robert F. and Ethel Kennedy's eleven children. She was married to Governor Andrew Cuomo in 1991, but they divorced in 2005 after she had a very public affair with a polo-playing neighbor in 2003, which prompted Cuomo's divorce lawyer to say, "Mr. Cuomo was betrayed and saddened by his wife's conduct during their marriage. Despite that, for the sake of their three daughters, Mr. Cuomo has been trying to keep their marriage together for some time. But he will try to accommodate Ms. Kennedy Cuomo's decision to leave the marriage. In the interest of the privacy of the party's children and the family, Mr. Cuomo will make no further comment."