In the largest union town in America, the arrival of a virulently anti-union company has riled up plenty of progressives. There have been rallies and protests over Amazon’s decision to plop a new campus, with as much as $3 billion worth of city and state subsidies, in Queens, and leading the way has been the influential Retail, Wholesale and Department Store union [RWDSU] and their voluble president, Stuart Appelbaum.

“Amazon has a record of routinely mistreating and exploiting its workers at all levels,” Appelbaum said at a Wednesday press conference near City Hall, held to promote a new report summarizing Amazon’s labor abuses. “Amazon’s disturbing record as an anti-worker, union-busting company should be scrutinized more closely by our city and state leaders.”

At first glance, the coalition mobilizing against Amazon looks similar to the one that coalesced in the last decade around stopping Walmart from bringing a superstore to New York City. Labor unions, including RWDSU, were strongly opposed, and Democratic politicians took turns bashing the Arkansas retail giant as a job-killer.

But Amazon won’t be landing in New York without labor help. One of the state’s most prominent unions, 32BJ SEIU, is in support of the deal, as is the Building and Construction Trades Council of Greater New York, a close ally of Governor Andrew Cuomo.

Other leading unions not impacted by the deal, like the United Federation of Teachers and 1199 SEIU, the state’s largest union, have been silent. As in past labor battles, the unions affected most are left to fend for themselves while others watch on the sidelines—or pursue a course that puts them in direct conflict with their allies in the labor world.

Solidarity among unions remains, at best, a theoretical premise.

Unlike Walmart, which had merely a large store of underpaid workers to offer the five boroughs, Amazon is promising much more: up to 25,000 jobs, many of them white collar, and potentially eight million square feet of office space. While Amazon has aggressively fought any efforts to organize among its lower-paid warehouse workers, there will be union construction jobs, according to Mayor Bill de Blasio, who hashed out the agreement in secret with Cuomo. The public does not precisely know how many union construction jobs were promised.

But the Building Trades union has never billed itself as particularly leftist—by nature of the people it represents, it is always pro-development, partnering often with a real estate lobby that, in other contexts, works to block pro-tenant bills in Albany that likely benefit the rank-and-file union members who struggle, like everyone else, to find an affordable apartment in New York City.

Gary LaBarbera, the president of Building Trades, declined to be interviewed for this story. In a statement sent through a spokesman, he said Amazon “will be a historic boom for our economy and will result in thousands of middle-class construction jobs with benefits for residents of all five boroughs.” 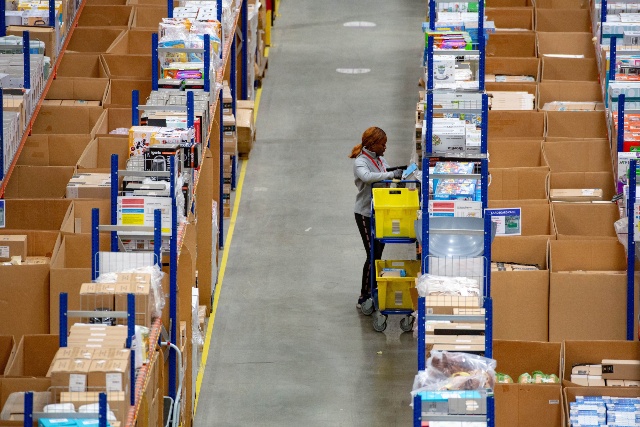 32BJ, the union representing building and service workers like doormen and janitors, has taken on a much larger role in the progressive movement. With its large, Spanish-speaking constituency, the union has long denounced President Donald Trump’s anti-immigrant rhetoric and helped organize against the White House’s attempts to deport the undocumented.

And unlike other unions in Albany that tolerated or enabled the Independent Democratic Conference, a breakaway group of Democrats who for years formed a power-sharing alliance with State Senate Republicans, 32BJ heavily backed Alessandra Biaggi, the insurgent Democrat who defeated Jeff Klein, the IDC’s ringleader.

Yet 32BJ went all-in for Amazon because the trillion dollar tech and retail behemoth worked out a deal for union labor to provide security and maintenance at the headquarters. The union could see as many as 3,000 jobs.

Héctor Figueroa, the president of 32BJ SEIU, also told Gothamist he sees Amazon’s arrival as an opportunity to show a notoriously anti-union company that an organized workforce could be beneficial—and he hopes that within a decade, all of Amazon’s employees will be unionized.

“Amazon is already here in New York City. I see packages going everywhere in our neighborhood. Amazon exists in New York City. They employ 4,000 people here,” he said, referring to existing warehouses in the five boroughs. “This is an expansion of Amazon’s presence in New York. This an opportunity for us to change this company and organize it.”

Much of the opposition to the Amazon deal has revolved around the use of subsidies to lure a supremely wealthy company to a city it might have been attracted to anyway. Politicians who signed a letter in 2017 urging Amazon to come to New York now oppose the Queens campus on these grounds.

Figueroa said he was “sympathetic” to those concerns.

“The real way we end the race to the bottom, which city and states have engaged in for decades, is to really act at the federal level,” he said, citing laws in the Europe Union that heavily regulate public subsidies to corporations.

In a sense, the cleaving of organized labor is nothing new to New York. In his first term as governor, when he had won office campaigning as a centrist “new Democrat,” Cuomo warred with public sector unions while forming close alliances with certain private sector unions, including the building and construction trades.

This very same dynamic—32BJ and Building Trades opposing the RWDSU—played out a decade ago. When the long-defunct Kingsbridge Armory in the Bronx was targeted for development that included a shopping mall, RWDSU and local elected officials helped kill the deal over a failure to mandate higher retail wages at the city-subsidized project.

Campaigning in favor of the project was LaBarbera. 32BJ abandoned a coalition opposing the shopping mall to side with the building trades union, which viewed the project as a jobs-creator.

“There is a history of this kind of disagreement and a kind of lack of solidarity, if you want to call it that,” said Joshua Freeman, a labor historian at CUNY. “The building trades in part, have a different situation. Most of their members work on jobs with a limited time span. These unions have an acute sensitivity for the need for the next job without paying a whole lot of attention to what the broader social impact would be.”

In an interview with Gothamist, Appelbaum said he had not asked allies in the labor movement to build a broader coalition to combat Amazon. He called 32BJ SEIU “good friends” but charged they were defending Amazon out of their “own self-interest and not for the greater good of working people and the labor movement in New York.”

“I think there are people who have made the argument that by osmosis, somehow, Amazon is going to come here and see the light of operating in New York City, a union town, and change its ways,” he said. “It’s nonsense.”