In 1968, shortly after the assassination of Martin Luther King Jr., the Republican governor of New York decided it was time to rescue the neighborhoods afflicted by crime and rot.

Nelson Rockefeller, the last of a breed of liberal Republicans who once commanded the party, created a new entity called the Urban Development Corporation. The UDC was designed to build affordable housing in cities across New York and create jobs for the working class and poor, particularly people of color. To carry out his vision, Rockefeller appointed a renowned urban planner named Edward Logue.

“Is this corporation going to be subject to local rules, zoning and codes?'' Logue asked Rockefeller and a state lawyer, according to the New York Times.

“Of course,” the men replied.

“Then it’s no damn good,” Logue shot back, waving his hand. “It’s not going to mean a damn thing. You’ve got to bypass all that.”

Once Logue left the room, Rockefeller turned to the attorney. “'Well, that's what we’ve got to do. Do it.”

Granted the powers of eminent domain, the ability to sell its own bonds, and exemptions from local zoning laws, the UDC set out to do, initially, what it was designed to do: wield the authority of big government to help people. The UDC would build more than 30,000 units of low-income housing from the Bronx to Buffalo and three entire “new towns,” including the development of Roosevelt Island, where residents first moved to in 1975.

A half century later, the same powers the UDC once employed to build affordable housing and combat urban blight are now channeled for an entirely different purpose: to ensure Amazon, a corporation with a trillion dollar valuation, can build a new headquarters in Long Island City, one of Queens’ most expensive and desirable neighborhoods.

Now known as the Empire State Development Corporation—the UDC and the Department of Economic Development were consolidated in 1995—the quasi-public entity, controlled by Governor Andrew Cuomo, is the driving force behind the Amazon deal, allowing the city and state to circumvent local zoning laws, particularly a lengthy land use process that would have gone before the City Council, to seize the waterfront property for the online retail giant.

The dramatic evolution of a government-backed entity from a builder of low-income housing to aggressive real estate development and corporate welfare—Amazon can receive up to $3 billion in combined city and state tax breaks for placing a headquarters in New York—mirrors the transformed approach to governance in New York City, where mayors and governors since the fiscal crisis have made it their primary mission to make the city attractive to wealthy elites. Even Mayor Bill de Blasio, a self-identified progressive and the first mayor in a generation to treat income inequality as a problem worth solving, has championed the Amazon deal, defending the union-busting corporation because it has promised to deliver relatively high-paying jobs.

When New York City was on the brink of bankruptcy, the UDC faced an existential reckoning in 1975, defaulting on $130 million worth of obligations.

“I think that by the mid-1970s [the UDC] had largely abandoned its founding mission, and really did not have too much to do with providing low income housing any longer,” said Kimberly Phillips-Fein, a history professor at NYU and the author of Fear City: New York’s Fiscal Crisis and the Rise of Austerity Politics. “Its own fiscal crisis provided the occasion for moving it away almost entirely from this early project.”

The UDC could not master the central contradiction of urban capitalism: somehow building cheap housing and remedying social ills while remaining financially self-sufficient at a time when investors were shunning cities.

To turn the housing agency around, politicians decided it needed a new aim. The UDC would get into the business of real estate development. As early as 1979, the new UDC was described as “a cautiously run real‐estate enterprise rather than a daring spearhead for social betterment.” 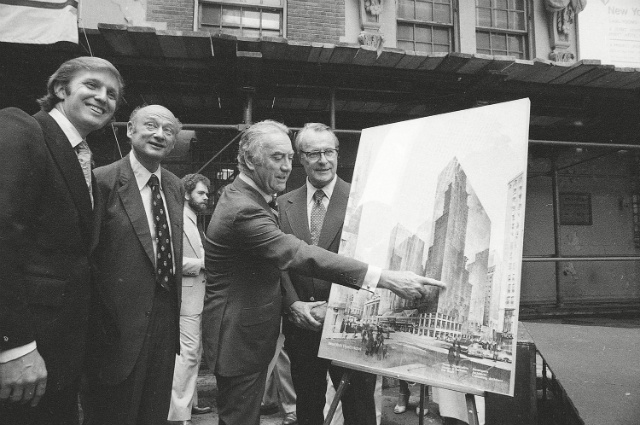 Governor Hugh Carey points to an artists' conception of the new New York Hyatt Hotel/Convention facility that will be build on the site of the former Commordore Hotel, . At the launching ceremony are, from left: Donald Trump, son of the city developer Fred C. Trump; Mayor Ed Koch of New York; Carey; and Robert T. Dormer, executive vice president of the Urban Development Corp (AP/Shutterstock)

It was fitting, then, that the UDC would go into business with a young, rapacious real estate developer named Donald Trump. Trump’s father, Fred, a self-made millionaire, was the real mover-and-shaker, a political ally and donor of the Democratic mayor, Abe Beame. With Fred’s assistance, the future president secured the rights to redevelop the decrepit Commodore Hotel near Grand Central Station. The UDC was the vehicle for the deal, blessing young Trump with an unprecedented bounty: a 40-year tax abatement.

“It was all designed to be a money-making scheme for Donald Trump to build out his empire in Manhattan,” said Samuel Stein, a PhD student at Graduate Center of the City University of New York who teaches urban studies at Hunter College.

The UDC has played a significant role in a number of other controversial mega-developments over the years, including Atlantic Yards (now known as Pacific Park) in Brooklyn, the development of Times Square, and Brooklyn Bridge Park. In its current incarnation, the UDC “isn’t doing any low-income housing that isn’t tied to high-income housing,” said Stein, the author of Capital City: Gentrification and the Real Estate State.

“It pretty much has given up on the model of doing state-sponsored low income housing, even if done through eminent domain in questionable ways.”

If Amazon’s opponents want to seize on a particularly regrettable chapter of UDC’s history, they could look to the role the authority played in the rapid expansion of New York’s carceral state. Under Gov. Mario Cuomo, Andrew’s father, the state built more than two dozen prisons to house a ballooning population of largely black and brown inmates during the tough-on-crime 1980s and 1990s.

“Gov. Mario Cuomo used the Urban Development Corporation to finance the largest prison expansion program in New York State’s history,” said Jack Norton, a research associate at the Vera Institute of Justice. “Cuomo and the state legislature used the Urban Development Corporation to finance prison expansion by creating a lease-purchase arrangement with the Office of General Services and the Department of Corrections, essentially playing a shell game in order to circumvent the need for a statewide referendum for general obligation borrowing, as required by the New York State Constitution.”

Under Cuomo’s predecessor, Hugh Carey, the state had tried and failed to pass a referendum for a $500 million general obligation bond to build new prisons. Initially, Cuomo made a humanitarian argument for new prisons, according to Norton, who has studied the expansion of prisons in New York. The current prisons were squalid and overcrowded, and the new governor, who would become a liberal icon in that period, argued inmates deserved better facilities.

But the UDC-driven explosion of prisons in New York would take on a new rationale, one mostly unheard of before Cuomo’s tenure: prisons as a model for economic development. Cuomo hoped the employment of prison guards and personnel in rural, economically-depressed towns could spur growth. Even today, as his son shrinks the number of prisons in the state, this argument lingers.

“The UDC has been used, whether by Rockefeller or Cuomo, as a way to circumvent democratic controls on public debt, and in that sense has helped to depoliticize development policy in the state,” Norton said. “The use of the UDC by Mario Cuomo to build prisons is also a large part of how prisons became synonymous with development in many parts of the state over the past 30 plus years.”

For Amazon’s critics on the left, the moral high ground may be of little comfort when examining the UDC’s track record of getting what it wants. If the development corporation or its successor, the ESD, wants to build a prison, a basketball arena, or a convention center, it usually can. Zoning laws and local oversight are no obstacle. As Edward Logue understood more than 50 years ago, you’ve got to bypass all that.

#amazon
#donald trump
#ESD
#UDC
#analysis
#longform
#original
Do you know the scoop? Comment below or Send us a Tip