by Elizabeth Kim and Jim O'Grady

Amazon and city economic development officials are in the midst of a marketing blitz aimed at local residents who may be wary about the behemoth headed their way. The e-commerce giant, which in November struck a controversial behind-closed-door deal with Governor Andrew Cuomo and Mayor Bill de Blasio, wants to persuade Queens residents that a big new Amazon campus in their borough is worth the estimated $3 billion in tax credits and incentives the company will receive.

"The announcement of our new headquarters in Long Island City was the beginning of what we hope will be a long and mutually beneficial partnership between New Yorkers and Amazon,” reads one of the mailers, using language similar to the full-page ads the company bought in the Daily News and NY Post last month—the first salvo in its P.R. blitz. 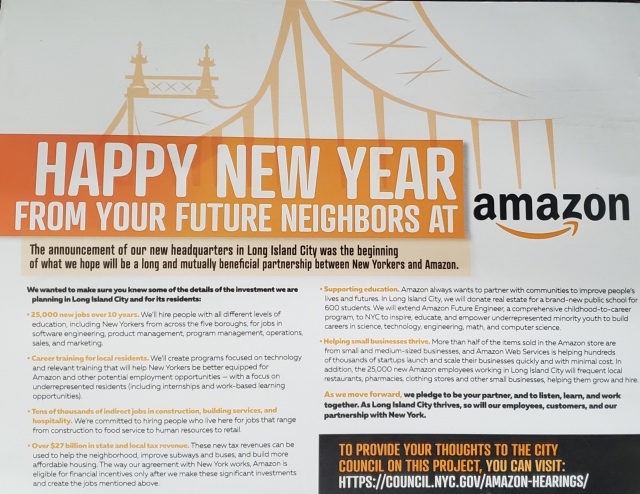 The mailer touts a host of local economic benefits, including Amazon’s promise to create 25,000 new jobs over 10 years and generate over $27 million in state and local tax revenues. Asked how many mailers have been sent out to date, an Amazon spokesman who works at SKDKnickerbocker, a public affairs firm hired in December to represent the company with its public outreach in New York, said only, “We want to make sure New Yorkers know the details of our investment and how it benefits them."

The company's full-court press in public relations may be warranted. Since the deal was first announced in November, there has been sustained public outcry over the size of deal’s tax incentives, and the fact the project will be able to skirt a lengthy land use process that would have required a host of approvals from planning officials, community boards, borough presidents, and the City Council.

Given its unprecedented scale and the complexities of the approval process, some elected officials have begun to question whether Amazon’s New York headquarters is a foregone conclusion.

Johnson referred to the argument made by State Senator Michael Gianaris, the new deputy majority leader whose district encompasses Long Island City and other parts of western Queens, that the project’s future hinges on the five-member Public Authorities Control Board, on which the state Assembly and Senate majorities each have a vote. For a plan to win approval, the board must be unanimous.

The little-known board, which rules on economic development issues, famously came under the spotlight in 2005 for putting the kibosh on Mayor Michael Bloomberg’s plan to build a stadium on the West Side.

But Governor Cuomo and Empire State Development, the agency handling the deal, have said that while the project’s overall land use plan will need to go to the PACB for approval, its members will not be able to vote on (and subsequently deny) the state’s $505 million grant to Amazon.

Asked by Lehrer if the issue might go to court, Johnson said, "It's possible."

As a sign that Amazon is taking the opposition seriously, one of the mailers includes a phone number for Gianaris and asks supporters of the Amazon deal to call him. The senator told Gothamist it’s actually more of a sign that not even Amazon is fully confident that every part of their project will be sailing through the state approval process. “If this was such a great deal—if it was a done deal—they wouldn’t need to engage in a public relations campaign,” he said.

Gianaris has been distributing a mailer of his own, asking residents to stop the Amazon plan.

At the Hunters Pt Civic Association mtg tonight, where NYCEDC is presenting on HQ2 tonight, reps for @SenGianaris are passing out the following info... this follows Amazon's recent mailers to the community asking them to call their elected reps to support HQ2 pic.twitter.com/doD38wV7yy

Kim, who is running to become New York City Public Advocate, has made his anti-Amazon stance central to his campaign, using a mailer that contrasts his position to that of his opponents in the race.

Helping Amazon with its sales pitch has been the New York City Economic Development Corporation, which this month made several presentations to neighborhood groups, including the Hunters Point Civic Association, the District 30 community education council, and the Old Astoria Neighborhood Association.

Part of the EDC's campaign appears aimed at assuaging residents that the state will hold Amazon accountable for its promised job growth. During the presentation before the Old Astoria Neighborhood Association this month, the EDC's Nathan Bliss described the state as having “incredible control” over the deal.

"If the company fails to meet its obligations under these agreements, there are penalties. There’s recapture, potentially even of property," he said.

How this would all play out is complicated. Laura Schultz, director of fiscal analysis and senior economist at the Rockefeller Institute, said that under the state's Excelsior Jobs Program, one of two economic development incentive programs the company is eligible for, Amazon would be entitled to $1.2 billion in tax credits.

She added that the recapture of tax incentives would be done by adding the amount to Amazon's tax bill. In the event Amazon failed to pay its tax bill, the state could begin the seizure of assets, including property.

Richard Khuzami, president of the Old Astoria Neighborhood Association, praised the company and the city for going before residents' groups. He said the response by his members to the EDC's presentation was positive.

"It's extremely helpful for the public to hear all positions so they can make informed decisions about his momentous project," he said, adding, "I think it's a real positive that they are going out to the public through print and live presentations.”

But in the face of gentrification concerns and the prospect of rising rents, not everyone has been persuaded by the mega-e-retailer's pitch. A "Stop Amazon" petition started by Gianaris and Bramer on Change.org has garnered more than 5,300 signatures to date.

And on Twitter, several mailer recipients were skeptical or outright derisive, of both Amazon's marketing effort and its planned Queens headquarters.

Hey @amazon - 25,000 jobs sounds good but what is the quality of said jobs? Can those workers unionize? Do they get breaks? Good pay? I need more than a mailer to convince me. #NoAmazonNYC #BoycottAmazon @PrimedOutNYC pic.twitter.com/ZoEWFVTmrs

Thx @amazon for reminding me to call my reps to tell them I am OPPOSED to HQ2 @jessicaramos @CatalinaCruzNY #Queens neighbors did y’all get this mailer too? #amazonnyc @jdavidgoodman pic.twitter.com/cTSIr1ok7t

New Yorkers will have a bigger forum to weigh in on the Amazon deal through two upcoming hearings—one dedicated to collecting public input—that will held by the City Council. In December, during the first hearing, where opponents of the deal outnumbered supporters, councilmembers lashed into Amazon executives and the head of the city’s Economic Development Corporation James Patchett.

“We got played,” Johnson said during the hearing.

The next hearing, held by the City Council's Committee on Finance, is scheduled for Wednesday, January 30th at City Hall.

For more, listen to Jim O'Grady's WNYC report on the Amazon charm offensive:

UPDATE: An earlier version of this story misstated Senator Gianaris’s role on the Public Authorities Control Board. He is not currently a member. As deputy majority leader, however, he has a say in recommending appointees to the board.

#amazon
#public relations
#queens
#original
Do you know the scoop? Comment below or Send us a Tip