Amazon Is Pulling Their Nazi Insignia Ads From The NYC Subway

Amazon has decided to remove their ads for The Man In The High Castle from the 42nd Street subway Shuttle that feature a modified Nazi Reichsadler eagle and a variation of a World War II-era Japanese flag.

A spokesperson for the MTA confirmed to Gothamist that Amazon was pulling the wrap-around advertisements.

The decision to remove the ads comes as Mayor Bill de Blasio issued a statement criticizing the takeover, saying, "While these ads technically may be within MTA guidelines, they’re irresponsible and offensive to World War II and Holocaust survivors, their families, and countless other New Yorkers. Amazon should take them down."

Amazon did not immediately respond to our request for comment.

An MTA spokesman told Variety that the Shuttle wraps were supposed to run from November 15 through December 14. 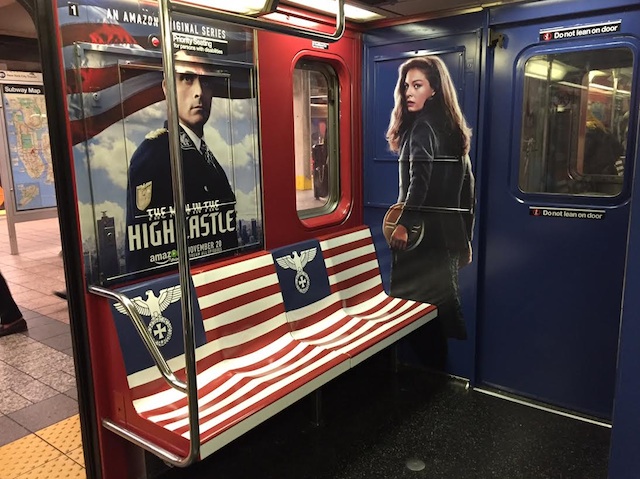 A Shuttle conductor at Grand Central told a reporter earlier today that the offending train was still in service, but that "today is the last day."

Joseph Rosenfield, a 24-year-old Brooklynite, stopped to take a picture of the wrapped Shuttle.

"There used to be some pride in this country," he said. "I don't think this could be aired 20 years ago."

#MTA
#mta ads
#speech
#the man in the high castle
#times square shuttle
#original
Do you know the scoop? Comment below or Send us a Tip