In most of New York City, some 6.5 million people enjoy same-day delivery service from Amazon Prime, sparing them the inconvenience of having to enter a physical store to stock up on window cleaner or those little nubs that are always falling off of in-the-ear headphones. But one borough is conspicuously missing out on the e-commerce behemoth's offer of instant gratification: the Bronx is the only borough with no same-day delivery coverage, as a Bloomberg analysis revealed last week. Now, Bronx politicians are calling for change, arguing that Amazon's exclusion of the borough rests on outdated stereotypes.

The Bloomberg report compared Amazon's own data on same-day delivery areas with U.S. Census Bureau data, and found that across the country, Amazon's coverage is spotty when it comes to predominantly black neighborhoods. In Atlanta, Chicago, Dallas, and D.C., black residents are half as likely as white residents to have access to same-day delivery. And in New York City, residents in Manhattan, Brooklyn, Staten Island, most of Queens, and virtually every neighborhood between the city and Philadelphia can get their baby wipes and bathmats delivered within hours of placing an order—except for people living in the Bronx and eastern Queens. 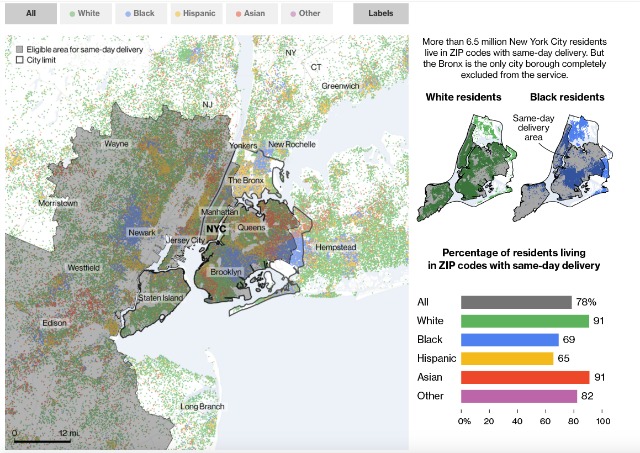 "In what is either an unfortunate coincidence or an act of digital redlining, the excluded areas tend to be minority communities," he wrote. "This is entirely unacceptable. While your company serves four of the five boroughs, my own constituents, largely Black and Latino in ethnic makeup, are excluded. Such a level of insensitivity, if not hostility, should not be an accepted business practice for the world's leader in online retail."

Of the five boroughs, the Bronx has the lowest percentage of white residents—33 percent, according to census data—and the omitted portion of Queens comprises primarily black and Asian residents.

Earlier this week, Assemblyman Jeffrey Dinowitz, who represents the Bronx in the state legislature, called the Bronx's exclusion "simply outrageous," and said that he thinks Amazon should be investigated by the New York Attorney General. The AG's office didn't have any comment on whether that's something that it will be pursuing.

"I find it completely implausible that Amazon is able to offer same-day delivery service from Manhattan all the way down to Philadelphia, but can't manage to offer the same service to a single neighborhood in the Bronx, a borough which has seen one of the fastest economic growth spurts in New York City history over the last seven years," Dinowitz said. "It's a real slap in the face to the 1.4 million proud Bronxites who might want to do business with Amazon...Amazon's failure to overcome decades of institutionalized segregation is a harsh reminder that we still have a long way to go before all Americans have the same opportunities."

Diaz and Dinowitz are hoping that their public outrage will actually provoke change—and that's not out of the realm of possibility. Another neighborhood left out of otherwise spotless same-day delivery is Roxbury in Boston, where 59 percent of residents are black. After that conspicuous gap in coverage was revealed in last week's Bloomberg report, a number of Boston and Massachusetts politicians lashed out at Amazon—and within a few days, the company announced that it would soon begin offering same-day delivery in Roxbury.

Amazon didn't respond to a request for comment on whether it'll expand its service to the Bronx, but a spokesperson said that "we will continue expanding our delivery capabilities and are adding more zip codes rapidly."

#amazon
#amazon prime
#jeff bezos
#ruben diaz jr.
Do you know the scoop? Comment below or Send us a Tip