Alumni Accuse City Of Stalling Its Probe Into NYC Yeshivas

A group of New Yorkers raised in ultra-Orthodox communities across the city protested on the steps of City Hall yesterday, accusing the Department of Education of falling behind on its commitment to conduct a good-faith investigation into 39 NYC yeshivas—schools for Orthodox children, primarily boys, grounded in talmudic study.

"I was told months ago that the investigation would be complete in Spring 2016, and now we're questioning if there is an investigation at all," said attorney Norman Siegel, who is representing the concerned parents and alumni.

About 50 yeshiva parents, alumni and former teachers sent a letter to the DOE last July, expressing concern that students at dozens of yeshivas in Brooklyn and Queens receive only an hour and a half total of English and math instruction four days per week. In many cases secular education is cut off at age 13, meaning boys are consistently unprepared for college and careers in the secular world.

"There's no talk of college in yeshiva," Naftuli Moster, the executive director of Young Adults For A Fair Education [Yaffed], told us in August. Moster grew up in Borough Park and when he applied for college, "I was asked about my high school diploma and I didn’t know what that was."

According to State law, education in private schools, including yeshivas, must be "at least substantially equivalent" to that provided in public schools. The DOE agreed to launch an investigation into potential violations this summer, but Moster says that the investigation has petered out completely. One of two DOE employees assigned to the investigation, former-General Counsel Courtenaye Jackson-Chase, left the department in February without notifying Yaffed, according to Moster. The only DOE point person left, to Yaffed's knowledge, is District 20 superintendent Karina Costantino. They haven't heard anything from her since January. 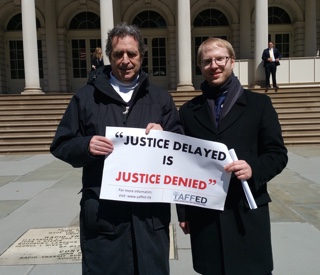 Siegel and Moster outside City Hall on Wednesday (Isaac Carmignani).

The DOE initially planned to generate a set of requests that superintendents would distribute to private schools in their districts. Responses to these questionnaires would help the DOE determine if yeshivas were in fact violating the law. School visits would only be made if the responses raised red flags.

This approach concerned Yaffe from the get-go. "They're not just going to come forward and say, 'Yes we've been violating the law for all this time,'" Moster said on Thursday. "So it was ridiculous in the first." Then, last month, the DOE told Patch that it was still "in the process of finalizing" these forms, and that they would be sent out "soon." Yaffed's confidence plummeted further.

Now Yaffed is demanding that the DOE appoint a new investigative team—one required to communicate regularly on its progress. Random schools visits and interviews with current yeshiva students should be part of the investigation.

Siegel is skeptical of the City's motives. "I grew up in Borough Park," he said. "Growing up in New York you learn that in the politics of NYC, insular communities are a politically-powerful voting block."

Chaim Levin, 26, attended Oholei Torah in Crown Heights from 1995 to 2005 (he's currently challenging the school's alleged cover up of physical abuse, in addition to its educational record) and says that he didn't receive any English instruction at all. "They are proud of the fact that they only teach holy study," he said on Thursday. "The old testament, the Talmud, Jewish history, the redemption and the Messiah.. and not a word of English." Levin's nephew is a current student. "Nothing's changed," he said. Oholei Torah did not immediately respond to a request for comment.

"The assertion that DOE has not sent requests for information to schools is inaccurate," said Mayoral spokesman Austin Finan in a statement.

"The mayor believes strongly that every child in our city deserves a first-rate education. The DOE's investigation of these schools is active and ongoing," he added. "We will not comment further on an ongoing investigation."

"We didn't want to declare war on the yeshivas, and so we were trying to resolve this without going to court," Siegel said on Thursday. "But stalling or minimizing this issue is only going to increase the likelihood that we will have to go to court to get our remedy."

#department of education
#DOE
#yeshivas
Do you know the scoop? Comment below or Send us a Tip