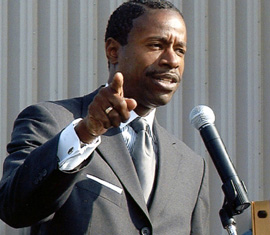 For the first time since 1965, Democrats have taken control of the New York State Senate, sweeping into the majority last night on President-elect Barack Obama's coattails. All the incumbent Democrats held on to their seats, and two longtime GOP incumbents lost: Queens Republican Serphin Maltese lost to Democratic City Councilman Joseph Addabbo and Suffolk County's Caesar Trunzo lost to Democratic challenger Brian Foley. Maltese blamed his defeat on "the Obama craze" and said he hopes"that sanity prevails with what is now the Senate minority, and then in two years, hopefully, we'll take another shot at them."

According to NY1, only 723 votes separate Republican Senator Frank Padavan of Queens from his Democratic rival, Queens City Councilman James Gennaro. The Daily News reports that Padavan holds a slim 50.4% to 49.6% lead with all precincts reporting, and the race could be decided by the counting of paper ballots. And Newsday has it that in another very tight race in Nassau County, incumbent Republican Kemp Hannon narrowly defeated Democratic challenger Kristen McElroy.

For the first time since the Great Depression, Democrats will now have full control of the Legislature and will claim at least 32 out of the 62 seats in the Senate. But according to City Room, party leaders are concerned about the allegiance of four Democratic senators from New York City who may refuse to support a Democrat for the majority leader’s post, currently held by Senator Dean G. Skelos, the Nassau County Republican. If Senator Malcolm Smith of Queens (pictured), the Senate’s top Democrat, takes the majority leader’s post, then all of Albany’s “three men in a room”—the governor, plus the Senate and Assembly leaders—would be NYC-based.

Gerald Benjamin, a political scientist and dean at SUNY New Paltz tells Newsday "there's a real concern for the outside-of-New-York-City voice in the leadership. I think the Senate Democrats will have to think very hard about who the second guy is." And unless Republicans retake the chamber in 2010, Democrats would control the redrawing of district lines. Speaking to the Times, Benjamin predicted that "if the Democrats control redistricting, the Republicans are in the wilderness for decades."