Yesterday, the U.S. Census released data showing that the number of New Yorkers living in poverty increased, though the national number dropped. With more than 1.54 million New Yorkers in poverty, that makes it a 2% increase from last year, a change the city attributes to how the data was collected. Still, Mayor Bloomberg said, "Whether the numbers are overstated or understated, there is no question that they are much too high and you have to keep working on finding ways to reduce the poverty level."

Mayor Bloomberg proposed reforming and expanding the Earned Income Tax Credit, including raising the salary ceiling to qualify for benefits from $12,000 to $18,000, eliminating the marriage penalty and to ask more of fathers (namely that they pay their child support). New York Coalition Against Hunger executive director Joel Berg, who said that the 1.54+ million number may actually be even greater without counting the homeless and illegal immigrant, said of the Mayor's plans, "They are all wonderful proposals, but we need to dramatically expand what we’re doing.

The Daily News printed the results from the 2006 American Community Survey (excerpt below). New Jersey and Connecticut ranked 48 and 49 respectively, with 8.7% living below the poverty line in NJ and 8.3% in CT. 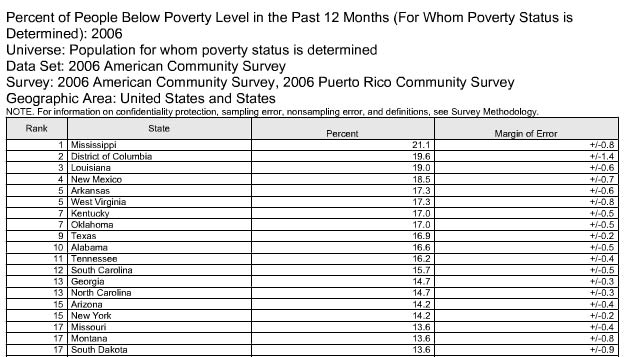 The Census data also shows that the income gap between the New York's richest fifth and poorest fifth is the biggest in the country. And in Manhattan, the numbers break down to the richest 20% making $351,333 annually versus $8,855 of the poorest 20%. The Times has a graphic of income disparity in NYC and other areas, including parts of NJ and Connecticut.