Almontaser Wants to Go Back to School 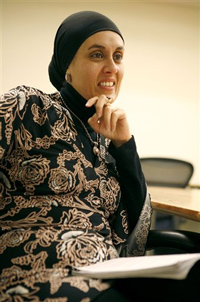 Debbie Almontaser, the erstwhile head and founder of Brooklyn's Khalil Gibran International Academy, will sue the city for violating her freedom of speech. She also claims Mayor Bloomberg and Schools Chancellor Joel Klein forced her to resign as principal under threat of closing the dual-language school.

The KGIA, named after the Lebanese Christian poet, teaches students Arabic and English and aims to foster cross-cultural understanding, but critics accused Almontaser of establishing a madrassa to indoctrinate children into a life of jihad. When she left, Danielle Salzberg (an Orthodox Jew) was named temporary principal. Schools spokesman David Cantor denies anyone threatened to close the new dual-language school and said Almontaser's resignation came after a controversy involving a shirt with the word "Intifada" (a term commonly associated with the militant uprising in Israel).

Additionally, Almontaser wants to be reinstated as the school's principal. She said establishing the school was her American dream but "it turned into an American nightmare." Almontaser, who immigrated to the U.S. at age 3, also criticized the organizations and individuals of fostering hatred of Arabs and Muslims. For one, many used her Arabic first name, then placed "Debbie" in quotes, implicitly suggesting her English name was an alias and the one she used professionally - see this Post story for an example.

There are currently 24 other applicants looking to supplant interim principal Salzberg, and the Post says, via an aide to Klein, there is no way Almontaser will get her job back. And shortly after September 11, 2001, Almontaser wrote an essay in the Gotham Gazette, encouraging understanding and respect between communities: "We must get to know each other by speaking to one another. We need to make sure that everyone's voice is heard rather than silenced, to overcome our fears."