Alleged Killer Of Etan Patz Doesn't Stand By His Confession

The mentally ill man accused of kidnapping and murdering six-year-old Etan Patz in 1979 appeared in court yesterday for his first public appearance since confessing to the crime in May. Pedro Hernandez, 51, said nothing as the pre-trial indictment was presented; according to the Times, he "walked slowly into the packed courtroom, scanning the audience with a slight grin." Hernandez’s lawyer, Harvey Fishbein, did all the talking during the three minute hearing—he says his client will plead not guilty, and he intends to make sure the confessions (Hernandez made four) are never heard by the jury. 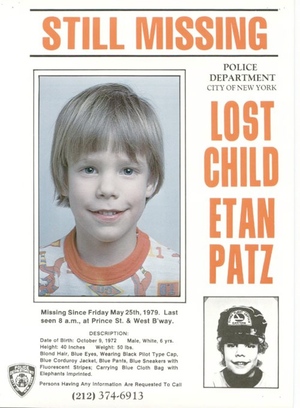 “This is not a case of not guilty by insanity,” Fishbein told reporters yesterday. “That refers to, ‘I did it, but I did it as a result of my mental disease or defect.' That is not the case here.” According to Fishbein, Hernandez has a long history of mental illness, and has been diagnosed with schizophrenia and bipolar disorder. Fishbein intends to use testimony from experts on false confessions in order to make Hernandez's confessions inadmissible. If this happens, it's hard to see how a jury would convict Hernandez, because the Manhattan D.A. has no evidence.

Allison Redlich, an associate professor at the School of Criminal Justice at SUNY Albany, tells the Times in many cases where it's proven that a false confession was given, the suspect had a history of mental illness. Police interrogation tactics are almost always "psychologically manipulative," according to Redlich, who tells the Times, "They’re really based on trickery, on feigning friendship or feigning flattery, things that people with mental health problems are more vulnerable to." But falses confessions have been documented in many cases where mental illness played no role; one of the most infamous involved the conviction of four men (the "Norfolk Four") in the 1997 rape and murder of a woman in Norfolk, Virginia.

Hernandez had worked in a bodega near the bus stop at the time of Etan's disappearance. In May, family members told investigators that Hernandez had admitted to hurting a child. He subsequently confessed four times to the crime, telling investigators that he lured Etan to the basement of the bodega, where he allegedly strangled him and threw his body out with the trash. In one confession that was videotaped, police kneeled on the floor and prayed at his side. Fishbein told reporters yesterday that this interrogation technique was “manipulative.”

In response to criticism about the merits of the case, the Manhattan DA issued a statement earlier this week saying, "the indictment is the outcome of a lengthy and deliberative process, involving months of factual investigation and legal analysis." And one source "close to the investigation" tells the Post, "The DA’s office didn’t flip a coin and decide to go with this confession — you can assume it has been thoroughly vetted by experts in false confessions."