Alleged Federal Reserve "Bomber" Got A Lot Of "Help" From FBI

The Bangladeshi man who was arrested yesterday for allegedly trying to detonate a van full of explosives outside the Federal Reserve was under FBI surveillance six months after arriving in the U.S. in January. Quazi Mohammad Rezwanul Ahsan Nafis (Nafis), 21, allegedly tried to form a terrorist cell as soon as he got to America, but one of the individuals he attempted to recruit in July was actually a source for the FBI. According to the feds, Nafis was closely monitored as he tried to carry out his alleged plan to "destroy America" in a variety of ways.

Sources say Nafis also considered bombing the New York Stock Exchange and assassinating President Obama, but finally settled on exploding a van outside the Federal Reserve because it was an easier target. The FBI worked with Nafis to obtain fake explosives that Nafis believed were real, and the feds coordinated with the NYPD to make sure Nafis could drive his "bomb"-laded van to the Federal Reserve and park it there without getting hassled by the cops. 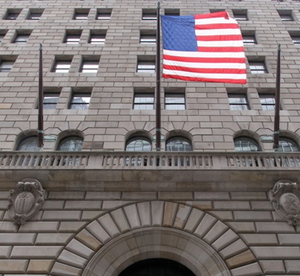 In a written statement taking credit for the bombing, Nafis explained that the most efficient way to destroy America was to target our economy. The statement featured quotes from “our beloved Sheikh Osama bin Laden” to justify killing women and children. According to the FBI, during the drive to the Federal Reserve, Nafis also spoke fondly of Anwar al-Awlaki, the American-born Yemeni imam and top Al Qaeda recruiter killed by a U.S. drone attack.

The undercover agent says Nafis' plans were vague but grandiose. "I don’t want something that’s like, small. I just want something big,” he said, according to the complaint (below). “Very, very, very, very big, that will shake the whole country.” And so the FBI provided fake assistance to Nafis as his plan took shape. The FBI's close involvement with Nafis will likely come under questioning from Nafis' defense attorneys, and the department has been criticized for enabling and encouraging would-be terrorists in order to bust them. In 2009, after four men were arrested in the Bronx for allegedly plotting to bomb synagogues, a judge wrote that “The government made them terrorists.”

The FBI explains how Nafis went from trying to start a terror cell to trying to bomb the Federal Reserve with their assistance:

During the investigation, Nafis came into contact with an FBI undercover agent who posed as an al Qaeda facilitator. At Nafis’ request, the undercover agent supplied Nafis with 20 50-pound bags of purported explosives. Nafis then allegedly worked to store the material and assemble the explosive device for his attack. Nafis purchased components for the bomb’s detonator and conducted surveillance for his attack on multiple occasions in New York City’s financial district in lower Manhattan. Throughout his interactions with the undercover agent, Nafis repeatedly asserted that the plan was his own and was the reason he had come to the United States.

The FBI says that "before entering Manhattan, Nafis armed the purported explosive device for detonation by turning on the cellular phone to be used in the detonator, installing the battery in the detonator and connecting the wires linking the detonator to the purported explosive materials." He then checked into the Millennium Motel, recorded a video claiming responsibility for the attack, and then allegedly tried to detonate the bomb. It was then that federal agents swept in and arrested Nafis.

Nafis faces life in prison if convicted of attempting to use a weapon of mass destruction and attempting to provide material support to al Qaeda. But it's unclear if Nafis had any substantive ties to al Qaeda, or simply found the terrorist group to be a source of inspiration. He was arraigned yesterday in Brooklyn Federal Court and is being held without bail. Here's the court filing:

#federal reserve
#nafis
#terrorism
Do you know the scoop? Comment below or Send us a Tip