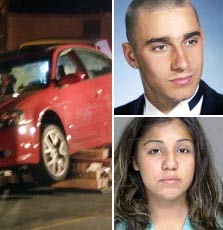 Jesenia Vega, the 27-year-old woman charged with DWI after fatally running over her boyfriend, told police that boyfriend Louis Wiederer had pushed and punched her and that she got into the car to get away from him. But Suffolk County prosecutors asked that charges be upgraded, noting that Wiederer, who clung to Vega's car door to stop her from driving drunk, was dragged under the vehicle and killed.

The Suffolk County police are investigating Vega's claim, but Detective Lieutenant Gregory McVeigh told Newsday that she didn't seem to have any injuries, "I would say that that's something we're open to at this point in terms of our investigation, but we still have more work to do." In yesterday's coverage, Newsday had spoken to another block party reveler who said, "It looked like he was hitting her, but he was trying to stop her... She was totally irrational."
Vega's lawyer Guy Allen had hoped for a $5,000 bail, denying that his client was driving drunk and pointing out blood alcohol results weren't ready yet. However, a judge noted that Vega admitted to police she had been drinking. Bail for Vega was set at $100,000 cash or $200,000 bond.

Newsday has PDFs of the criminal complaint and witness statements - the statements are chilling.

Composite of photographs from Newsday.com

#alcohol
#crime
#drinking
#police
#running
#suffolk county
Do you know the scoop? Comment below or Send us a Tip