Police have released new survelliance video of the suspect in the alleged bias attack which took place at a Dallas BBQ in Chelsea earlier this week.

The Hate Crimes Task Force are investigating the attack on Jonathan Snipes and his boyfriend Ethan York-Adams, who were celebrating Cinco de Mayo on Tuesday when they ended up in a brawl with another patron who they say repeatedly called them gay slurs, and hit them over the head with a chair.

You can see a video of the suspect below.

The two men had accidentally knocked over a drink as they were leaving the restaurant, which led to a verbal confrontation with the other table, which then became physical. "A table near us audibly started making pretty gross comments about the two of us like, 'White f----ts, spilling drinks,'" Snipes told DNAInfo. "I don't let anyone talk to me like that. I went over there and asked, 'What did you say about us?'"

The NYPD describes the suspect as "a light complexioned male black, wearing a black blazer and a white shirt." Anyone with information in regards to this incident is asked to call the NYPD's Crime Stoppers Hotline at 800-577-TIPS. The public can also submit their tips by logging onto the Crime Stoppers Website or texting their tips to 274637(CRIMES) then enter TIP577.

While the police are still trying to track down the suspect, it seems there are many people online who are already aware of his identity. A counter-narrative has sprung up to Snipes's account, alleging that he was the aggressor, and the suspect is a gay man himself. Waddie Grant Jr. writes on G-List Society that the man who filmed the fight, Isaam Sharef, told him that Snipes "struck one of the Black men first which kicked off the entire brawl." More Grant Jr.'s G-List story, headlined "Gay Hate Crime Or White Gay Privileged Media Manipulation On NYC’s Chair Throwing Fight?":

Additionally, the word “faggot,” according to the concerned videographer, seemed to be a response to Snipes’ arrogance after knowing that he bumped the Black men’s table and knocking their drinks rather than homophobia.

According to another source, who did not give me permission to identify his name - who I happened to have been cool with for years, mentioned that the chair throwing Black male seemed to check him out with frequent eye glances in a flirtatious manner. In other words, the alleged Black aggressor is possibly a same-gender-loving male, according to my source.

And guess what? One of the patrons at the restaurant called me and identified the chair thrower by name. I looked up the chair tosser’s Facebook profile, and he is allegedly gay, gay, gay and pretty popular in the ballroom scene. I am not going to snitch the guy out because I am on his side of self-defense minus the chair tossing and hate the white gay privileged narratives by gay bloggers, blogs and organizations who sensationalized this incident into more than what it was to protect the white gay hot head who wanted to demonize the Black gay men as aggressors over a physical altercation that he provoked when he could have ignored their foul language like I always do when insults are hurled my way.

Sharef has now made the video of the attack private, while other witnesses who posted photos and video of the incident, including Julius McFly, have also suddenly deleted many of their social media postings related to the fight.

In ALL my years coming to BBQ's never seen a fight but this was just a piece of it. Smh 😱😱😱😱😱😱… https://t.co/eOfftHEvCH

Two more people on Instagram have now identified the suspect as "trade," and also claim that Snipes "called trade a n----r and hit first." (Note: 'trade' is a gay slang term which "refers to the (usually) casual partner of a gay man or to the genre of such pairings. Men falling in the category of "trade" are not gay-identified") 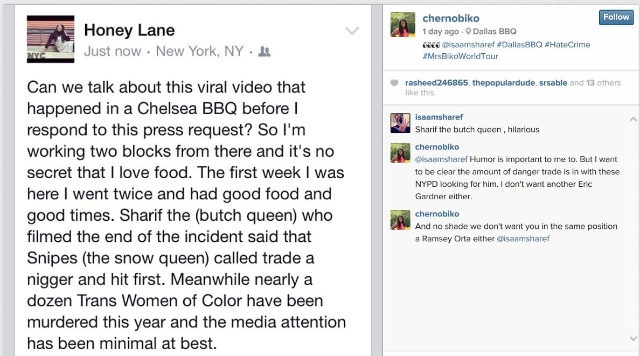 #anti gay attack
#Chelsea
#dallas bbq
#hate crimes
#jonathan snipes
#manhattan
Do you know the scoop? Comment below or Send us a Tip