The 19-year-old college student accused of setting off explosives at the Boston Marathon last week has been cooperating with federal investigators from his hospital bed. Due to a gunshot wound to his throat, Dzhokhar Tsarnaev has difficulty speaking—during his bedside court hearing yesterday (read the transcript below), the only word he uttered was "no," in response to a question about whether he can afford a lawyer—but investigators say he's been giving written responses and indicating yes or no by shaking his head.

Before being read his Miranda rights by a judge yesterday, Tsarnaev was questioned by the FBI, who waited outside the suspect's hospital room for him to regain consciousness. Investigators invoked the "public safety" exception to the Miranda rule, which allows them to question a suspect without informing him of his right to an attorney in order to obtain information about an imminent threat. None of what Tsarnaev told them before being read his rights will be admissible as evidence in his federal trial. 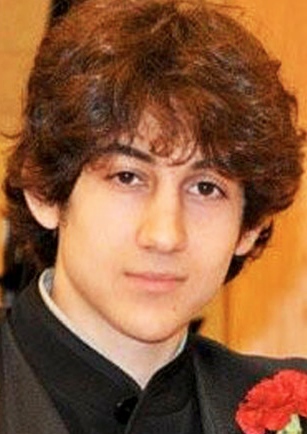 , Tsarnaev told investigators "that no foreign terrorist groups were involved in the incident; there was an online component to their radicalization—through watching videos, not through online communication; and that older brother, Tamerlan, was the driving force behind the planning and execution of the attacks. Tamerlan's motivation was that of jihadist thought, the source says, with its religious and political motivations, the idea that Islam is under attack and jihadists need to fight back."

Tsarnaev's statements, if true, reinforce speculation that his older brother Tamerlan Tsarnaev was the leader of the attacks. Relatives and friends have told the press that Tamerlan became increasingly militant in his interpretation of Islam over the course of the past two years, while his younger, impressionable brother appeared to be an easygoing stoner at the University of Massachusetts-Dartmouth.

Last night authorities released the transcript of Tsarnaev's bedside court hearing, during which he was formally charged and read his Miranda rights by Magistrate Judge Marianne B. Bowler. "At this time, at the conclusion of the initial appearance, I find that the defendant is alert, mentally competent, and lucid. He is aware of the nature of the proceedings," Judge Bowler said, according to the transcript (below). Next for Tsarnaev is his indictment, after which he'll be arraigned in federal court and asked to enter a plea.

After he recovers from his gunshot wounds, Tsarnaev will be moved to a federal prison, not a military prison. White House press secretary Jay Carney told reporters yesterday, "We will prosecute this terrorist through our civilian system of justice." During yesterday's hearing, Tsarnaev had three federal public defenders representing him. Federal Public Defender Miriam Conrad filed a motion Monday asking that two death penalty lawyers be appointed to represent Tsarnaev, "given the magnitude of this case," the AP reports.

Meanwhile, Federal investigators raided the New Bedford, Mass., home of two friends of Dzhokhar because the alleged bomber spent the night there on Monday and Tuesday night. In interviews with the Daily News, neighbors identified the friends as Azamat and Dias Timur. They were arrested on Saturday on immigration charges, and could face additional charges of harboring a fugitive. Officials with homeland security and the FBI are emptying the house to catalog everything as evidence. "They were looking at the drain pipes," said one man who lives next door.

#boston
#boston bomb
#boston bombing
#boston marathon
#Dzhokhar Tsarnaev
Do you know the scoop? Comment below or Send us a Tip