All the News Buildings Fit to Climb 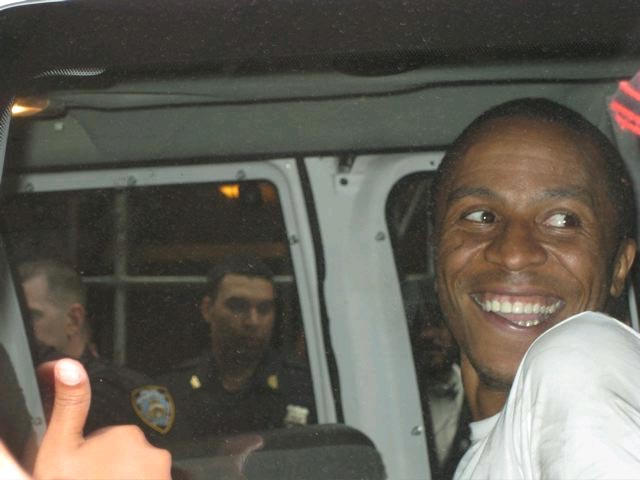 How does someone find out that his son is the second person climbing the New York Times Building in one day? Apparently when the Daily News calls. Renaldo Clarke Sr., a retired Con Ed worker, had been watching the footage of the guy scaling the side of the new Eighth Avenue skyscraper but didn't realize it was his son until the tabloid informed him. From the News:

Told the climber was his son, Clarke, 61, bolted from the living room couch in his Atlanta home and shouted to his wife: "Connie! It's Ray! It's Ray on that building."

"He's strong and he's not afraid of anything, and he's done dangerous things before," the father said with a trace of pride underlying his concern. "I just want you to know he is not a nut."

Renaldo "Ray" Clarke Jr., an IT consultant who had wanted to climb the building to raise awareness about malaria (his shirt said "Malaria No More"), claimed he was not copying Alain Robert's noontime climb (to publicize environmental issues) along the Times building. Onlookers and law enforcement officials noticed that Clarke wasn't as comfortable climbing as Robert was, since Clarke stopped frequently when his legs would cramp up. Now expert in observing building-scalers, one employee in the building told the Times, “When Alain came up this side, it was a cakewalk for him," but Clark seemed "fatigued...He stopped and hung by his arms. His feet were just swinging back and forth.”

Clarke made it to the top of the building safely and was taken to Bellevue for a psych exam before being taken to Central Booking and charged with reckless endangerment, criminal trespass and disorderly conduct (Robert faces the same charges). Clarke probably expected that, as his friend told the media, "I said, 'Are you sure about doing this? Have you thought about the consequences?' He replied he had thought about it."

The crowds watching, both from the street and inside the Times building, were simultaneously worried and thrilled. One woman said to WNBC, "Only in New York. This is why I live in New York." But the NY Times and Forest City Ratner (which developed the property) were not amused and assigned extra security to patrol the perimeter. And City Councilman Peter Vallone Jr. weighed in, "Regardless of the cause, in this day and age the police department has more important things to worry about than ridiculous stunts like this that endanger the police and public. If he wants to climb something, he can climb the walls inside his jail cell at Rikers."