Since converting our URL to Linthamist.com over a week ago, we've found that sometimes there's just too much good Jeremy Lin news than can be fit into one day. Thus, we're proud to bring you our end-of-the-day Lin wrap-up linkstravaganza: 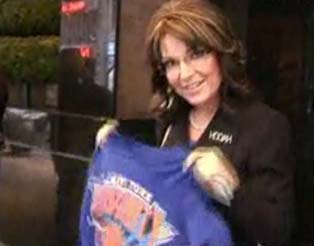 Sarah Palin Has Got Lin Fever: It seems there can be a bipartisan understanding on at least one thing: following President Obama's descent into linsanity yesterday, Sarah Palin showed off her love for Lin today, posing with a Lin t-shirt outside her Manhattan hotel today. Who can blame her? He is the Most Linteresting Man In The World. But she can't choose between Lin and Tim Tebow.

Hey Girl, Ryan Gosling Can't Jump: Jeremy Lin has been mashed up with the Gosling "Hey, Girl" meme for: "Hey Girl, It's Jeremy Lin." Va-Lin-tine's Day, assists, Shake Shaq, Corinthians 13:4-7—it's got everything a Lin fan could possibly want.

The Delivery Man Who Saw This Coming: Last weekend, we highlighted a post from an amazingly prescient statistician who predicted Lin's success over two years ago, going against every other basketball expert to declare that, "Lin is a good enough player to start in the NBA and possibly star." The WSJ caught up with Ed Weiland, the man who wrote that piece, and found out he wasn't what they were expecting: Weiland is a FedEx Ground delivery truck driver who writes sports analysis on the side.

Shirtless: If this is your sort of thing, here's a picture of Lin shirtless!

Linfographic:Here's a very cool graphic which charts all the accomplishments over the course of Lin's unbelievable first week as a starter in the NBA. Bonus: there's also a Lin video game, courtesy of ESPN.

Hey Now, You're (Sort Of) An All-Star: The NBA has figured out a way to get Lin into the All-Star game—according to ESPN, a league source confirmed that the NBA will make Lin part of the field for the Haier Shooting Stars competition during All-Star Saturday night. That would enable Lin to join teammate Iman Shumpert for the Sprite Slam Dunk Contest as well.

Next Up: The Knicks take on the New Orleans Hornets at the Garden tomorrow night at 8 p.m.—if they win, the team will be over .500 for the first time since Jan 12th.

#basketball
#jeremy lin
#knicks
#linkstravaganza
#linsanity
#nba
#sarah palin
Do you know the scoop? Comment below or Send us a Tip