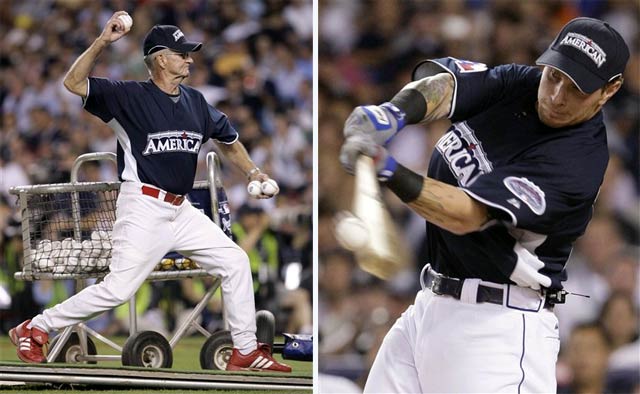 Photographs at top of Hamilton's pitcher, 71-year-old Claybon Counsil, and Hamilton by Kathy Willens/AP; below photograph of the Yankee Stadium crowd by Frank Franklin II/AP
Though the All-Star Home Run Derby has lost some luster in recent years with some of the biggest sluggers not taking part, this year's offered an intriguing story in--and thrilling performance from--Texas Ranger Josh Hamilton. Hamilton, a recovering drug addict and left-handed hitter, managed to hit 28 home runs in the first round--20 more than the next person--and broke Bobby Abreu's record of 25 home runs during a derby round. And the audience at Yankee Stadium ate it up, chanting "Hamilton! Hamilton!" 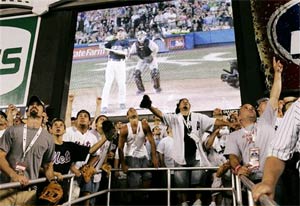 While the Minnesota Twins Justin Morneau ended up winning the derby, hitting five home runs in the final round to Hamilton's three, even Morneau admitted Hamilton's "I think everyone will remember Josh Hamilton more than they'll remember I won. I'm just glad I was a part of the whole thing."

Hamilton reveled in the moment, telling reporters, "My backyard used to be Yankee Stadium, and I used to be Babe Ruth, Mickey Mantle, Joe DiMaggio and all those guys." Also amazing: Hamilton's pitcher was his longtime batting practice pitcher, 71-year-old Claybon Counsil. If you missed the derby, there are videos after the jump of Hamilton's first round. But here's a short clip: In the middle of Hamilton's first round, he hit a home run into the black where fans are definitely not allowed. Some souvenir-eager men were scurrying around there, only for the security (it looked like the NYPD) to shoo them away and even stopping one by grabbing his neck!

Hamilton was one of the Rangers who decided to Slip'n'Slide on the tarp at Shea Stadium when rain stopped a Mets-Rangers game.

#All-Star Game
#feel-food story
#home run derby
#josh hamilton
#yankee stadium
Do you know the scoop? Comment below or Send us a Tip