At times it can seem like the 2018 midterm election has been looming forever. It was only four months ago that Alexandria Ocasio-Cortez defeated long-time Queens machine politician Joe Crowley in the Congressional primary, shocking the political establishment and giving hope to underdog candidates everywhere.

Her upset brought even greater attention to the critical swing races that will decide control of the House—some of which happen to be in our area—and continues to serve as an inspiration to many underdog candidates hoping to defeat incumbents on Tuesday. As the election fast approaches, it’s worth looking again at the amount of public outreach and sweat equity it took for Ocasio-Cortez’s upstart campaign to win a contest in which Crowley enjoyed all of the advantages of incumbency, including a reported 10-1 fundraising advantage.

In the year leading up to her primary win, Ocasio-Cortez held more than 280 campaign events in addition to debates and town hall meetings. Powered by over 1,000 volunteers, these events were organized in every neighborhood of New York’s 14th Congressional district, which includes the eastern Bronx and part of north-central Queens. “This massive volunteer effort lays the groundwork for a new kind of relationship between an elected representative and [their] constituency—one founded not on favor trading and machine politics, but instead on movement building and radical power sharing,” said Gabe Tobias, a field team leader for the Ocasio-Cortez campaign.

Donald Green, a professor of political science at Columbia University, and author of Get Out the Vote!: How to Increase Voter Turnout, has studied the relationship between campaign strategies and voter turnout since 1989. Green has conducted decades of experiments designed to determine which strategies—canvassing, phone calls, receiving print materials, commercial advertisements, and others—are the most effective. “The broad conclusion is that the more personal the more effective,” he said.

Green's research suggests the most effective tactic is a one-on-one conversation with a potential voter, which was the focus of Ocasio-Cortez’s strategy. Green said an authentic interaction with a door-to-door canvasser can increase voter turnout by five to eight percentage points, while messages that only remind people to vote produce an increase of less than a percentage point.

“If you're going to win an upset victory, typically the recipe is to hit the pavement and work on a one-to-one basis with voters. And what’s interesting about that is that it tends to be doubly effective. Not only is that kind of one-on-one personal campaign likely to produce votes, it's also likely to produce votes among people who are not likely to be surveyed by pollsters, so you then fly below the radar unexpectedly,” Green said. 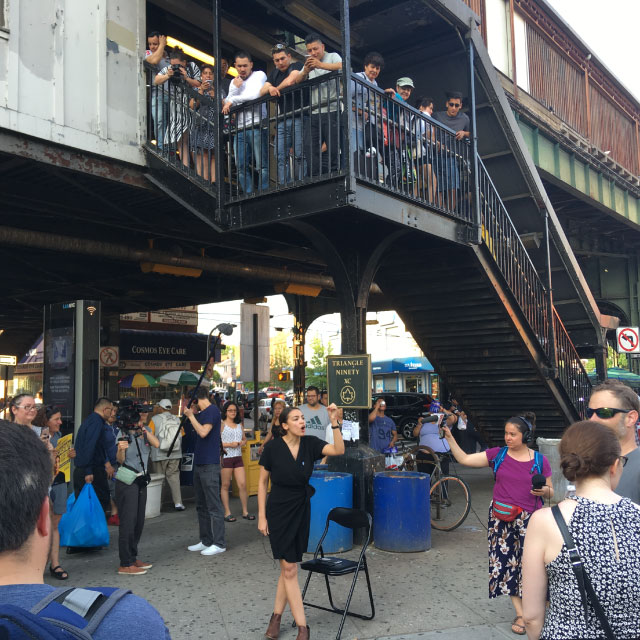 Alexandria Ocasio-Cortez draws listeners at the opening of her Queens campaign office in May 2018. (Photo: Gregory Tedesco)

He added that the typical campaign strategy of incumbents such as Crowley is to rely more on campaign consultants utilizing a strategy of persuasion rather than mobilization.

“Most primary elections are not competitive,” said Joshua Kalla, a political scientist at Yale. “Crowley probably didn't realize how competitive his race was going to be until it was too late to switch strategies.”

Crowley told CBS: "The loss, I have to take the responsibility for that. I did not, you know, do as I preach. I talk about all politics being local, I didn't remind folks of my accomplishments. I didn't talk about what I had done to help people in my district."

A search for advertisements of Crowley campaign events leading up to the primary only yielded eight events. This included one get-out-the-vote rally just three days before the election. “It’s kind of like the Tortoise and the Hare story. As it sometimes is in the case of an incumbent who loses: they’re a bit overconfident. They don't think that they need to have all hands on deck in terms of producing a victory, especially in the primaries,” Green said.

Ocasio-Cortez’s campaign believes their strategy helped attract the volunteers needed to win the primary and can also serve as the foundation for a larger movement.