Alec Baldwin Says He Didn't Punch 'Anyone Over A Parking Spot'

Hours after being arrested for an alleged street fight over a Manhattan parking space, Alec Baldwin spoke out about the incident on Twitter. "Normally, I would not comment on something as egregiously misstated as today’s story. However, the assertion that I punched anyone over a parking spot is false. I wanted to go on the record stating as much," he wrote. "I realize that it has become a sport to tag people w as many negative charges and defaming allegations as possible for the purposes of clickbait entertainment."

He added, "Fortunately, no matter how reverberating the echos [sic], it doesn’t make the statements true."

On Friday afternoon, the actor was arrested outside his home on East 10th Street in the Greenwich Village after allegedly punching another man. According to the NYPD, the other man "got to a [parking] spot they were both going for." 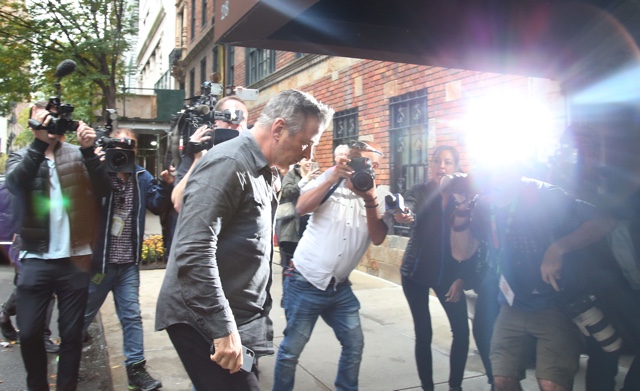 The Daily News reports, "One of Baldwin’s family members was trying to hold the spot for the thespian when [Wojciech] Cieszkowski, slipped his black Saab station wagon into the space, said sources. The two men argued and when the victim went to a pay the parking meter, Baldwin ran up and struck him, authorities said."

However, TMZ says both men may have been shoving each other: "Law enforcement sources tell TMZ, Wojciech Cieszowski -- the man who swooped in and took a parking space that Baldwin believed was his -- told cops Baldwin struck him with his hand. That is more consistent with a slap than a punch. True enough, a slap can still be assault, but it's generally less serious. What's more ... we're told there is surveillance video, but it's super grainy. You see what appears to be a shoving match between the two men but it's hard to make out if Baldwin actually struck him."

"To top it off, Baldwin and Cieszkowski received parking summonses for not paying the meter, according to sources," per the Daily News.

Baldwin's eldest daughter, Ireland Basinger Baldwin, posted an image of the Disney character Thumper and one of his famous sayings:

A post shared by Ireland Basinger-Baldwin (@irelandbasingerbaldwin) on Nov 2, 2018 at 8:29pm PDT

Baldwin has had previous run-ins with the law: He was arrested after apparently punching a Daily News photographer in 2012; and, in 2014, was arrested after being given a ticket for bicycling in the opposite direction of street traffic.

THIS IS SUCH A CLOSE CALL pic.twitter.com/4dplwC1Nsi

#alec baldwin
#arrest
#dibs
#parking space
Do you know the scoop? Comment below or Send us a Tip