Baldwin was arrested on November 2nd outside his Greenwich Village home after he allegedly pushed a man who took a parking space that one of Baldwin’s relatives was holding for the actor. The 49-year-old victim went to a hospital complaining of jaw pain.

Wearing a dark shirt, a dark purple scarf and glasses, Baldwin, 60, pled guilty to harassment in the 2nd degree which is a violation, not a crime.

Assistant District Attorney Ryan Lipes said the people had an opportunity to review video of the incident and to speak with witnesses.

As a condition of the plea, Baldwin must complete a short anger management program.

Criminal Court Judge Herbert Moses asked Baldwin a series of questions, concluding with, “Are you pleading guilty because you are guilty?” 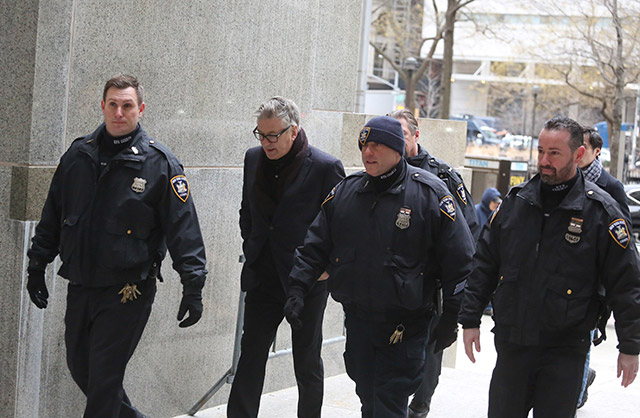 “He’s an asshole. He stole my spot. I did push him,” Baldwin told the arresting officer, according to the Voluntary Disclosure Form.

Baldwin's attorney Alan Abramson read to the court a statement on Baldwin’s behalf at the arraignment.

“Mr. Baldwin is a public figure whose reputation has been damaged by media reports that claim that he punched a man on a New York City Street.

“There is incontrovertible video evidence that has been turned over to the District Attorneys office that proves beyond all doubt that Mr Baldwin never punched anyone,” Abramson continued. "Mr. Baldwin did not commit any crime and we are confident that once this matter is fully investigated it will be resolved swiftly and appropriately in court."

Baldwin and Abramson did not speak as they left the courthouse. However, Baldwin soon started tweeting about his guilty plea:

1- At the Criminal Court bldg on Centre Street, I pled guilty to a charge of harassment, a violation.
In that bldg today there are 3 murder trials scheduled, one involving a white supremacist who killed someone in Times Square.
All the press was outside the courtroom I was in.

2- the press reported that I punched someone. That is untrue, and that is a serious charge. A man was punched in NY recently and died.
(https://t.co/uz6mpohmlH)

3- nothing that resembles justice ever enters or leaves any courtroom in this country.

4- The vermin at Fox News continues to tell a story about “an alleged punch.”

There are three cameras in front of my bldg.

#alec baldwin
#greenwich village
#parking space
Do you know the scoop? Comment below or Send us a Tip