With just a few days left before the inauguration no one wants to go to, plans are in motion for mass protests in DC and New York. And while almost no celebrities, besides Riff Raff, want to hang out with Trump, plenty of big names are coming together to march on Trump International Hotel on inauguration eve.

Mark Ruffalo, Alec Baldwin & myself will be holding a massive rally in NYC in front of Trump International Hotel this Thursday, 6pm! Come!

"We are sending a message to Washington that we will fight, at every step, discrimination and harmful policies, today, tomorrow and every day," Ruffalo said in a statement, according to NBC. "[We] are coming together to stand up for one another, as we will do every day, to protect the values we hold dear." 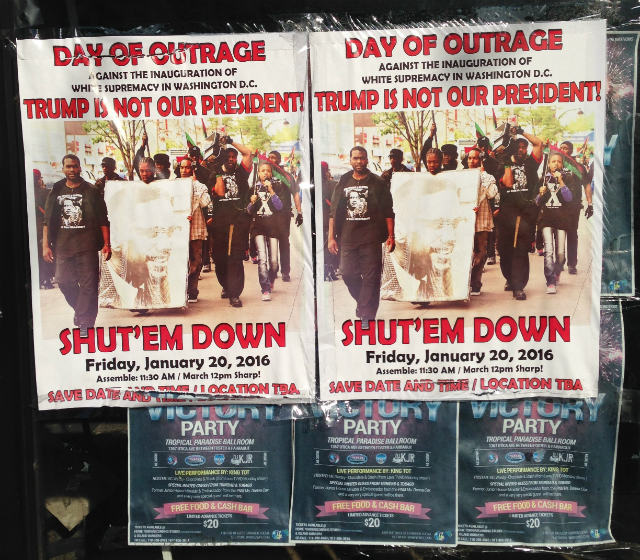 Flyers for the Friday demonstration near Trump Towers (Emma Whitford/Gothamist)

While Moore will head to DC to be one of the speakers at the Women's March on Washington, there will be more protests in NYC (and across the country) all weekend. That includes a "Day Of Outrage" protest planned for this Friday near Trump Towers, led by Councilman Jumaane Williams. And on Saturday, thousands of women are expected to gather at Dag Hammarskjold Plaza in front of United Nations headquarters at 11 a.m. for a march that’s billed as a "little sister" to the DC march.

I plan on engaging in #civildisobedience this Fri near Trump towers. Let me know if your down. @realDonaldTrump #ResistTrumpFromDay1 #MLK