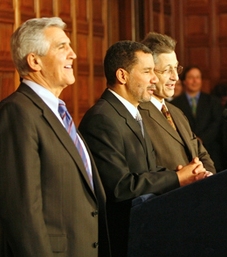 Paterson says the slowing economy will require a "change in culture and a change in course of where this state's priorities are...We're running out of time thinking we can tax our way into the future."

But State Senate Majority Leader Joseph Bruno emphasized that spending was necessary for the state to remain competitive--the Sun included this excellent Bruno quote, "New York State is the Empire State because we afford a quality of life. So, yes, you could crater. You could scorch and burn, and you could watch the people leave the state to where they have a more comfortable place."

The NY Times' analysis of the budget process calls Paterson a "phantom presence." The budget helps NYC by adding $643 million to city school funding. Mayor Bloomberg called it "good news for our City" with a "few glaring exceptions," namely the Assembly's refusal to vote on congestion pricing and the decision not to tie teacher tenure to student test scores.

#Albany
#budget
#governor paterson
#Joseph Bruno
#mayor bloomberg
Do you know the scoop? Comment below or Send us a Tip